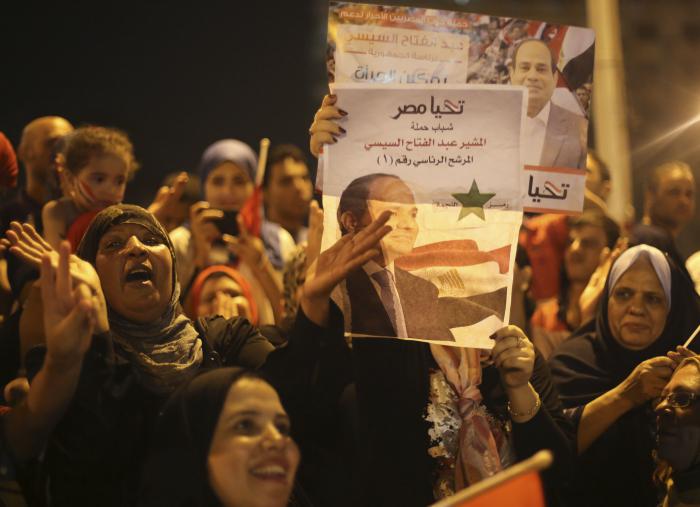 But a lower than expected turnout figure raised questions about Sisi’s credibility after his supporters had idolised him as a hero who can deliver political and economic stability.

Fireworks erupted in Cairo when Sisi’s results began to emerge. His supporters waved Egyptian flags and sounded car horns on the crowded streets of the capital.

Celebrations lasted through the early hours of the morning.

About 1,000 people gathered in Tahrir Square, the symbolic heart of the popular uprising that toppled Hosni Mubarak in 2011 and raised hopes of a democracy free of influence from the military. Sisi supporters honked car horns and waved flags.

Dancing dolls dressed in army fatigues quickly went on sale in Tahrir, a reminder of the army’s wide influence in Egypt.

Sisi is the latest in a line of Egyptian rulers from the military that was only briefly broken during Islamist President Mohamed Mursi’s year in office.

Sisi, who ousted Mursi last year after mass protests against his rule, is seen by supporters as a strong figure who can end the turmoil that has convulsed Egypt since the revolution that ended Mubarak’s 30 years in power.

But critics fear he will become another autocrat who will preserve the army’s interests, and quash hopes of democracy and reform aroused by the protests that swept Mubarak. Sisi enjoys the backing of the powerful armed forces and the Interior Ministry, as well many politicians and former Mubarak officials now making a comeback.

“We are joyful because Sisi got so many votes, the results will come after an hour, we are here to celebrate,” said Kawther Mohamed, who went to Tahrir with her daughters.

But the former military intelligence chief may not have the popular mandate to take the tough measures needed to restore healthy economic growth, ease poverty and unemployment, and end costly energy subsidies in the most populous Arab nation.

Turnout was 44.4 percent of Egypt’s 54 million voters, according to the judicial sources. That would be less than the 40 million votes, or 80 percent of the electorate, that Sisi had called for last week.

It would also suggest that he had failed to rally the overwhelming support he hoped for after toppling Mursi.

A tour of Cairo polling stations on Wednesday saw only a trickle of voters. The same pattern emerged in Egypt’s second city, Alexandria, Reuters reporters said.

In a country polarised since the revolt against Mubarak, many Egyptians said voters had stayed at home due to political apathy, opposition to another military man becoming president, discontent at suppression of freedoms among liberal youth, and calls for a boycott by Islamists.

The two-day vote was originally due to conclude on Tuesday but was extended until Wednesday evening to allow the “greatest number possible” to vote, state media reported.

Hossam Moanes, Sabahi’s campaign manager, questioned the legitimacy of the vote, saying there had been violations.

“Until yesterday turnout was much lower than what was announced today. Did the percentage suddenly reach 46 percent?”

New York-based Human Rights Watch said a crackdown launched after Mursi’s ouster had created a repressive environment that undermined the fairness of the election.

“The mass arrests of thousands of political dissidents, whether Islamist or secular, has all but shut down the political arena and stripped these elections of real meaning,” said Sarah Leah Whitson, Middle East and North Africa director at Human Rights Watch.

Some Egyptians, exhausted after three years of upheaval, have concluded that Sisi is the man who can bring calm, even though past leaders from the military mismanaged the country.

Earlier, a 45-year-old shopkeeper, who gave her name as Samaa, said at a polling station in downtown Cairo that she was supporting Sisi. “Our country can now only be handled by a military man, we need order.”

Despite an official campaign to bring out more voters, Egyptians, many opposed to Sisi, gave various reasons for their lack of enthusiasm.

The Muslim Brotherhood, believed to have one million members, has rejected the election, describing it as an extension of the army takeover. The group, loyal to Mursi, was outlawed by the military as a terrorist group and saw around 1,000 members killed in a security crackdown.

Young secular activists, including those who backed Mursi’s ouster, had become disillusioned with Sisi after many were rounded up in the security crackdown that also restricted protests.

Since he gave a series of television interviews, many Egyptians feel Sisi has not spelled out a clear vision of how he would tackle Egypt’s challenges, instead making a general call for people to work hard and be patient.

He has presented vague plans to remedy the economy, suffering from corruption, high unemployment, and a widening budget deficit aggravated by fuel subsidies that could cost nearly $19 billion in the next fiscal year.

Sisi also faces the formidable challenge of crushing an Islamist armed insurgency and eliminating any threat from the Brotherhood, which as the country’s best-organised political force, had won every national vote held after Mubarak’s fall.

The Brotherhood has been devastated by one of the toughest crackdowns in its history. Its top leaders, including Mursi, are on trial and could face the death penalty. The movement seemed inspired by the low turnout in this week’s poll.

“Sisi and those with him have to admit that Egypt is against them and the Dr. Mohamed Mursi is their president and the president of all Egyptians,” said an Islamist alliance that includes the Brotherhood.

Obama plans to end US troop presence in Afghanistan by 2016