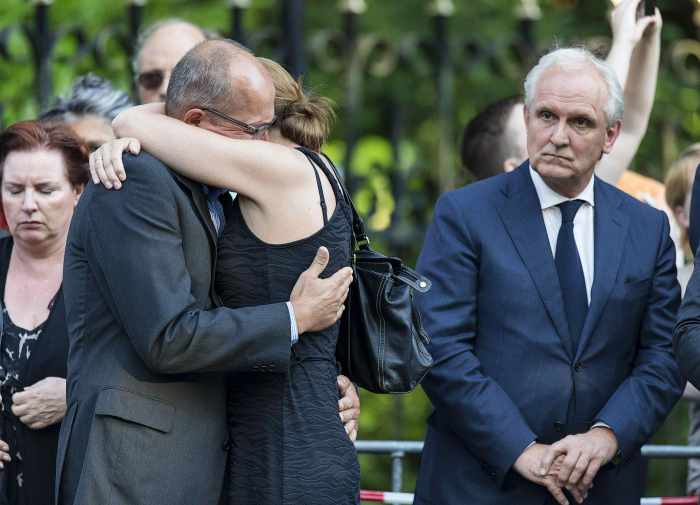 PHUKET: The bodies of the first victims from a Malaysian airliner shot down over Ukraine last week arrived on Wednesday at a military base in the Netherlands – a nation in shock and sorrow.

Bells pealed and flags flew at half mast in memory of the 298 people killed when flight MH17 came down in an area of eastern Ukraine held by Russian-backed separatists, in the first national day of mourning since wartime Queen Wilhelmina died in 1962. King Willem-Alexander and Prime Minister Mark Rutte joined dignitaries on the tarmac as two military aircraft carrying 40 plain wooden coffins landed at Eindhoven in the southern Netherlands.

A military guard of honour stood to attention as a trumpeter played The Last Post, the military funeral call for people killed in war.

After a minute’s silence – observed in stations, factories, offices and streets across this stunned nation – servicemen from all four branches of the Dutch military boarded the Dutch Hercules C-130 and Australian Boeing C-17 to carry the coffins to 40 waiting hearses lined up on the runway.

Relatives of some of the victims were present at the airport but were shielded from the media glare, officials said.

Thousands of people lined the 100 km (62 mile) route, watching from motorway bridges as the cortege travelled from Eindhoven to the military base at Hilversum where the bodies will remain until they can be identified, a task that could take months.

As the cortege passed, drivers spontaneously stopped their cars and watched silently from the side of the motorway. Some clapped in tribute, others threw flowers on the hearses.

The process will be repeated many times over coming days as the bodies of all the victims are brought home.

Amid U.S. accusations that the rebels shot the civilian plane down in error with a Russian-supplied missile, an opinion poll showed an overwhelming majority of the Dutch want sanctions imposed on Moscow, even if it hurts their own economy.

The Netherlands has disproportionately large trade and financial flows with Moscow due to its position as an oil and commodities trading hub and an offshore base for companies.

Church bells tolled as the planes carrying the remains arrived from Kharkiv, in eastern Ukraine, shortly before 4 p.m. (1400 GMT), and windmills around the low-lying coastal nation had been set in a mourning position – with the topmost sail fixed counter-clockwise from the vertical.

The remains of an unknown number of victims were transported in refrigerated rail carriages from the rebel-held part of Ukraine on Tuesday. Rutte has said that while some of the bodies may be identified immediately, it may take weeks or even months to complete the task.

With 193 of the dead from the Netherlands, Foreign Minister Frans Timmermans said almost every family in the country of 15 million knew someone who had been killed or their relatives.

“Think of all the people who were flying away on holiday, all the young people who had just finished their final school exams,” said Jikkie van der Giessen from Amsterdam.

“They were looking fully toward the future and then you’re shot down. Whether it was an accident or on purpose, the fact is it’s horrible,” she said.

Many of the passengers on the flight to Kuala Lumpur were tourists, but at least six were AIDS experts on their way to a conference in Melbourne, Australia on the deadly disease.

Representatives of the many countries whose citizens died in the crash were present at the airfield, including the governor-general of Australia, Peter Cosgrove. Their flags lined the airfield at half-mast on a cloudless day.

Trains came to a stop as the country observed a minute’s silence. No planes took off or landed at Schiphol Airport, from which the Malaysia Airlines flight departed, for 13 minutes around the time the bodies landed.

At Schiphol, airline and airport officials gathered in silence before a vast sea of flowers that has been swelling in front of the terminal building in the days since the crash, as travellers flying from the airport left their own tributes.

People gathered in front of the Royal Palace on Amsterdam’s central Dam square on Wednesday evening in a silent tribute.

With so many of their countrymen dead, the Dutch have been taking a leading role in the international effort to recover and identify the bodies and investigate the cause of the crash.

Dutch authorities are leading the investigation, with extensive help from other countries.

The plane’s black box flight recorders, handed over by the rebels’ leader, were flown from Ukraine on a Belgian military aircraft on Tuesday to Britain, where a team of experts examined the Cockpit Voice Recorder on Wednesday, finding no evidence that it has been tampered with.

Australian Prime Minister Tony Abbott said it was unclear how many bodies had been transported to Kharkiv and how may have been left behind at the crash site.

Rutte, thrust into an unaccustomed spotlight, said on Tuesday the disaster had fundamentally changed the way the Dutch view Russia, urging the European Union to unite behind a firm approach to force Moscow to cooperate with the investigation.

He has spoken almost daily with U.S. President Barack Obama, Russian President Vladimir Putin and other European leaders to coordinate the return of the bodies and discuss the investigation and the consequences.

With U.S. intelligence pointing to the aircraft having been shot down accidentally by the Moscow-backed separatists, the Dutch mood of sorrow is now mixed with indignation.

The loss of life has few parallels in recent Dutch history. More than 200 Dutch citizens died in the 1977 Tenerife airport disaster, in which two fully loaded Boeing 747s collided on the ground killing 583 in the world’s worst civil aviation disaster.

The worst post-war disaster in the Netherlands occurred in 1953, when the North Sea flooded low-lying eastern areas one stormy night, sweeping over dikes to take more than 1,800 lives.