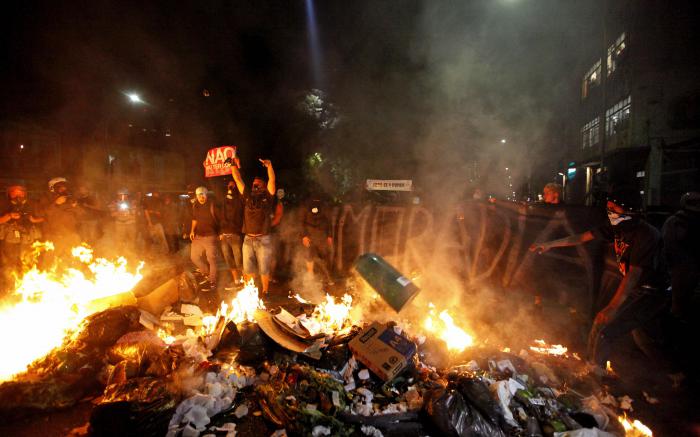 Less than a month before the tournament kicks off, and four months before a presidential election, Thursday’s protests will gauge the ability of demonstrators to once again rally frustrated Brazilians and the competence of police to manage unrest that occasionally escalated over the past year into violence and vandalism.

Protests against the World Cup took place in at least 12 Brazilian cities, according the GloboNews 24-hour news channel. In Sao Paulo, Brazil’s largest city, a main thoroughfare was blocked with burning tires. Protesters stormed a building in the capital Brasilia.

School teachers fresh from a vote to extend a strike joined with other protesters in Rio de Janeiro, blocking traffic on several main streets before marching on city hall. Crowds dispersed with little incident, but police sped the protest’s end with tear gas and sporadic searches.

Looters took advantage of a three-day police strike in the northeastern city of Recife, a World Cup venue. Supermarkets, shops and vehicles were ransacked. The army and units of a special national gendarmerie have been called in to keep order. Police voted to end their strike on Thursday night.

Groups in Sao Paulo, including the Homeless Workers Movement, marched towards the World Cup stadium that will be the site of the tournament’s June 12 kickoff. The stadium has become a target of protests because of the families displaced by its construction. [ID:nL1N0NZ04N]

One banner carried by demonstrators read: “The cup without the people, all to the streets again!”

In Brasilia the Homeless Workers Movement entered the headquarters of Terracap, the state company that manages the city’s 1.4-billion-real ($630 million) stadium – the country’s most expensive.

Protests are planned in up to 50 cities throughout the day, as demonstrators hope to rekindle momentum that led to millions of people hitting the streets last year during the Confederations Cup, a two-week World Cup warmup.

Last year’s demonstrations prompted President Dilma Rousseff, who faces a bid for re-election in October, to address the nation and acknowledge deficiencies in public services and investment in everything from education and health care to transportation and security.

In a speech on Thursday, Rousseff attacked critics of her government’s Cup preparations and called on the nation to welcome Cup visitors with “the hospitality that is part of the Brazilian soul,” the Globo newspaper reported on its website.

After a near-decade of steady growth before she took office, Brazil now struggles with a sluggish economy, persistent inflation, increasing crime and lacklustre investment.

Thursday’s protests come in a week which has already seen widespread strikes from dissatisfied labor unions across Brazil, from bus drivers and teachers in Rio de Janeiro to military police in the northeastern city of Recife.

Turkey in mourning after 274 die in mine disaster