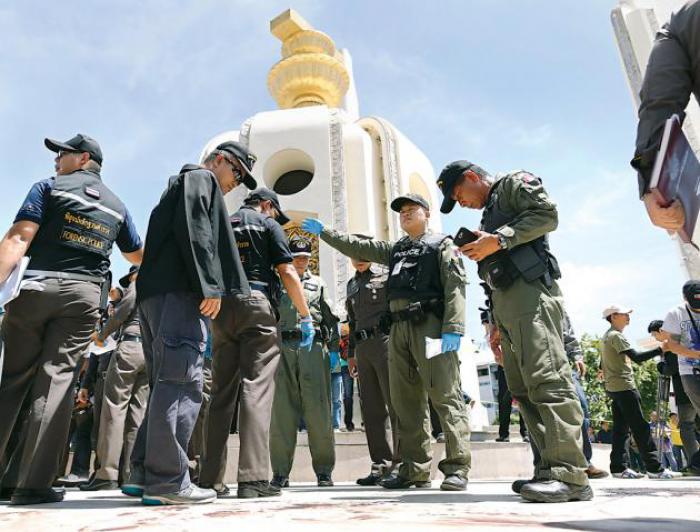 Army warns it will use ‘full force’
The Nation / Phuket Gazette

PHUKET: The mounting death toll of anti-government protesters has triggered the Army’s strongest reaction, saying it may need to resort to “full military force” if the bloodshed continues.

“I want to warn every group, especially those using violence and war weapons against innocent civilians, to stop now. If this goes on, the military may be needed to come out to restore peace and order,” Army chief General Prayuth Chan-ocha said in a statement.

The troops “may need to use full force to resolve the situation” if the violence escalates, he said, adding that “decisive measures” would be inevitable if common citizens are hurt.

The message, which came after grenade and gun attacks on the main protest site early yesterday killed three people and wounded 22 others, was aimed at individuals or groups who continue harming common people, Prayuth said.

They will have to face absolute legal measures. They will not be able to ask for any compensation. Those planning to raid or seize military venues should stop immediately, the statement said.

Military commanders can impose martial law in specific areas in the event of war or riot, but Prayuth, who now also serves as deputy director of the Internal Security Operations Command, did not mention that in his statement, which was read out by deputy Army spokesman Colonel Winthai Suvari.

Meanwhile, the Senate has come up with an eight-step road map to lead the country out of the political deadlock, according to sources.

The Upper House will seek a Constitutional Court interpretation as to whether caretaker Deputy Prime Minister Niwattumrong Boonsongpaisan can serve as acting prime minister. If he has no power to do so, the Senate Speaker, in his capacity as Parliament president, should have the authority to nominate a prime minister for royal endorsement, the sources said.

An interim government is expected to be in office for 18 months or longer to prepare reform proposals before a new general election is held, according to the guidelines.

The ruling Pheu Thai Party totally disagrees with any proposal to appoint an unelected prime minister and will not join the meetings hosted by acting Senate Speaker Surachai Liengboonlertchai, supposedly aimed at finding a way out of the political stalemate.

Pheu Thai issued its own 11-point statement reiterating that Surachai has no legal power to hold such sessions, even though they would be informal.

Its statement said the senators’ discussions with independent organisations, universities and other groups had the ulterior motive of lending legitimacy to the campaign by anti-government leader Suthep Thaugsuban to appoint a new prime minister. It said this could lead to more trouble.

Pheu Thai also admonished Surachai for helping Suthep, who has been charged with sedition, to seize power from the government.

“A new prime minister who is unlawfully appointed will face opposition from the people, and he will be unable to run the country normally. The problem will expand and the crisis could turn into a civil war,” the party said in its statement.

Democrat Party leader Abhisit Vejjajiva questioned the legitimacy of the caretaker government after Yingluck Shinawatra was dismissed as prime minister by the Constitutional Court recently for abuse of power.

“What is the point of the Cabinet members keeping their seats when they can no longer tackle the country’s many problems that have remained unsolved?” said Abhisit, whose party boycotted the February 2 election.

In a crisis like this, an interim government headed by a “politically neutral person” is needed to run the country for a short period of time, he claimed.

“This is the best way for the country’s democracy to move on,” he said.

PHUKET: NEARLY two weeks after the 6.3-magnitude earthquake that rocked the country’s north, many people in a hard-hit village in Chiang Rai province remain too frightened to move back to their homes. Several children in the north, who start their new semester today, will have to study in temporary classrooms.

He said 90 of the 107 houses in Ban Pa Lan sustained damage from a quake that also caused a long crack in the middle of the village. “The crack is more than 100 metres long. Mud gushed out of the crack too, prompting locals to flee en masse.”

Although the mud has stopped bubbling up, most locals continue to live in either provided shelter or in tents.

More than 700 aftershocks have taken place since the quake. The tremors have hit several schools hard. Apichart Jeerawuth, secretary-general of the Office of the Basic Education Commission (Obec), said 61 schools were damaged and engineering teams would take about one more week to inspect all affected schools and determine their safety.

“The hardest hit to date has been Mae Lao Witthayakom School. All three of its buildings will have to be brought down,” he said.

He believes Obec will have to find well over Bt500 million to repair or rebuild quake-hit schools.

“We have some Bt100 million only. So we will need to request Bt400 million more from the central budget,” he said.

Phanphittayakom School director Sanong Sujarit said he was worried about one dangerous building at his institute.

“Engineers have told us that the damaged building is dangerous,” he said.

Although the affected building is cordoned off, he remains worried about the safety of students and teachers. He is not sure when the budget for the demolition of the building will be approved.

Both Mae Lao Witthayakom and Phanphittayakom schools are in Chiang Rai province, which bore the brunt of the quake and aftershocks. Chiang Rai Governor Pongsak Wangsamer said officials continued to survey damaged properties as the aftershocks continued.

A 4.4-magnitude quake was recorded at 12.23am yesterday. Smaller tremors followed hours later.

“At this point, more than 8,000 houses have been damaged by the recent tremors,” he said, adding that the government had transferred Bt184 million to his provincial authority to give financial assistance to victims.

Owners of each damaged house will get no more than Bt33,000 in compensation.

Dr Sopon Mekthon, the department’s director, said three were from Bangkok, six from Pattani, four from Phetchaburi and one each from Samut Prakan, Yala and Trang. One of those under watch is a Saudi national. So far, laboratory tests have not found anybody infected, the doctor added.