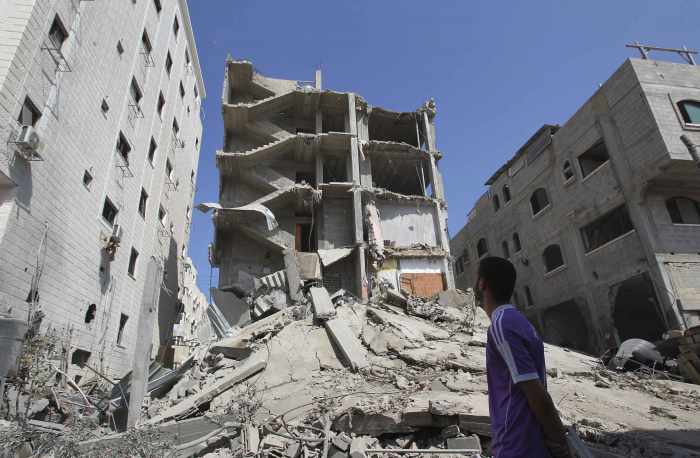 PHUKET: Gazan authorities said Israeli forces shelled a shelter at a U.N.-run school on Thursday, killing at least 15 people as the Palestinian death toll in the conflict climbed over 760 and attempts at a truce remained elusive.

United Nations Secretary-General Ban Ki-moon expressed his horror at the attack on the school at Beit Hanoun in the northern Gaza strip. “Many have been killed – including women and children, as well as U.N. staff,” he said in a statement. “Circumstances are still unclear. I strongly condemn this act.”

Ban later arrived to Cairo where he was expected to meet U.S. Secretary of State John Kerry, who has been working the telephones to try to broker an elusive truce.

But there was no sign of progress on securing a ceasefire in his four days in the region. “Gaps remain between the parties,” a senior U.S. official said, adding that Kerry wouldn’t stay “for an indefinite amount of time.”

The Israeli military said it was investigating the incident.

Israel Defence Forces (IDF) Lieutenant Colonel Peter Lerner said there was a chance the school had been hit by stray Hamas rockets. “It could be errant fire from the IDF or rockets landing from Gaza terrorists but we still don’t know, there’s still a question mark,” he told Reuters TV.

A spokesman for the U.N. relief agency said it had tried in vain to arrange an evacuation of civilians from the school with the Israeli army, and noted reports of Hamas rockets falling in the area at the same time.

Pools of blood lay on the ground and on students’ desks in the courtyard of the school near the apparent impact mark of the shell, according to a Reuters photographer at the scene.

Scores of crying families who had been living in the school ran with their children to a hospital where the victims were being treated a few hundred metres away. Laila Al-Shinbari, a woman who was at the school when it was shelled, told Reuters that families had gathered in the courtyard expecting to be evacuated shortly in a Red Cross convoy.

“All of us sat in one place when suddenly four shells landed on our heads … Bodies were on the ground, (there was) blood and screams. My son is dead and all my relatives are wounded including my other kids,” she wept.

Ashraf al-Qidra, spokesman for the Gaza Health Ministry, said that as well as the 15 dead, 200 people had been wounded in the attack. The director of a local hospital said various medical centres around Beit Hanoun were receiving the wounded.

More than 140,000 Palestinians have fled 17 days of fighting between Israel and Gaza militants, many of them seeking shelter in buildings run by the U.N. Relief and Works Agency (UNRWA). Israeli forces are trying to stop militants from Hamas and their allies from firing rockets into its territory.

“It’s clear that civilians are paying an unimaginable price caught between both sides,” said UNRWA spokesman Chris Gunness. “We were attempting to arrange a window for evacuation for the civilians with the Israeli army that never came. The consequences were deeply tragic.”

Britain called on Gaza’s rulers to accept a truce unconditionally. “Hamas must agree to a humanitarian ceasefire without pre-conditions,” Foreign Secretary Philip Hammond told a news conference in Cairo as Egypt tries to mediate.

“Then … the Palestine Authority (and) Israel would come together for discussions to ensure a lasting and sustainable peace in Gaza so that we do not repeat this cycle of violence.”

Hamas leader Khaled Meshaal said on Wednesday his fighters had made gains against Israel and voiced support for a humanitarian truce, but only if Israel eased restrictions on Gaza’s 1.8 million people. Hamas wants Egypt to open up its border with Gaza too.

The Palestinian death toll in Gaza reached 762 on Thursday, officials said. Israel has lost at least 32 soldiers in clashes inside Gaza and with Hamas raiders who have slipped under the fortified frontier in tunnels.

Palestinian rockets and mortar bombs have also killed three civilians in Israel. Such attacks surged last month as Israel cracked down on Hamas in the occupied West Bank, triggering the July 8 air and sea barrage on the Gaza Strip that escalated into an invasion a week ago.

With Washington’s encouragement, and the involvement of Turkey and Hamas ally Qatar, Egypt has been trying to broker a limited humanitarian ceasefire for the battered enclave.

One Cairo official said on Wednesday it could take effect by the weekend, in time for the Eid al-Fitr festival next Monday or Tuesday, Islam’s biggest annual celebration at the end of the fasting month of Ramadan.

But a U.S. official described any truce by the weekend as unlikely, as did an Israeli security cabinet minister who said the army would need one to two weeks to complete its main mission of razing tunnels used by Hamas for cross-border raids.

“If the talk is of a humanitarian hiatus for – this is not pleasant to say – removing bodies, all kinds of things that are connected to the civilian population in the short-term, this might be weighed,” the minister, Gilad Erdan, told Israel Radio.

“But I will oppose any ceasefire until it is clear both that the tunnels will be destroyed and what will happen in the post-ceasefire period – how we will guarantee that quiet for the residents of Israel will really be preserved in the long term.”

Israel earlier won a partial reprieve from the economic damage of the war with the lifting of a U.S. ban on commercial flights to Tel Aviv.

Though Israel’s Iron Dome rocket interceptor has shot down most of the rockets fired from Gaza, one that came close to Tel Aviv’s Ben Gurion Airport on Tuesday prompted the U.S. Federal Aviation Administration (FAA) to bar American flights there.

An ensuing wave of cancellations by foreign airlines sharply reduced traffic at Israel’s usually bustling international gateway at the height of the summer tourist season. It was hailed as a victory by Hamas and prompted Israeli Prime Minister Benjamin Netanyahu to appeal to the Obama administration to intervene.

The FAA cancelled the ban late on Wednesday after reviewing the security situation. The European Air Safety Agency (EASA) said on Thursday it was about to follow suit and lift its own recommendation to avoid flying to Tel Aviv.

US Airways, a unit of American Airlines Group Inc AAL.O, said it was resuming its non-stop Tel Aviv to Philadelphia service.(Full Story) Germany’s Lufthansa LHAG.DE said its suspension of flights to Tel Aviv would continue to Friday.

Gaza militants continued to fire rockets at Israel on Thursday, sending thousands in the country’s south racing to shelters or safe rooms. There were no reported casualties.

U.N. High Commissioner for Human Rights Navi Pillay said on Wednesday that there was “a strong possibility” that Israel was committing war crimes in Gaza, where medical officials say most of those killed were civilians.

Pillay also condemned indiscriminate Islamist rocket fire out of Gaza, and the U.N. Human Rights Council said it would launch an international inquiry into alleged violations.

A furious Netanyahu denounced the inquir