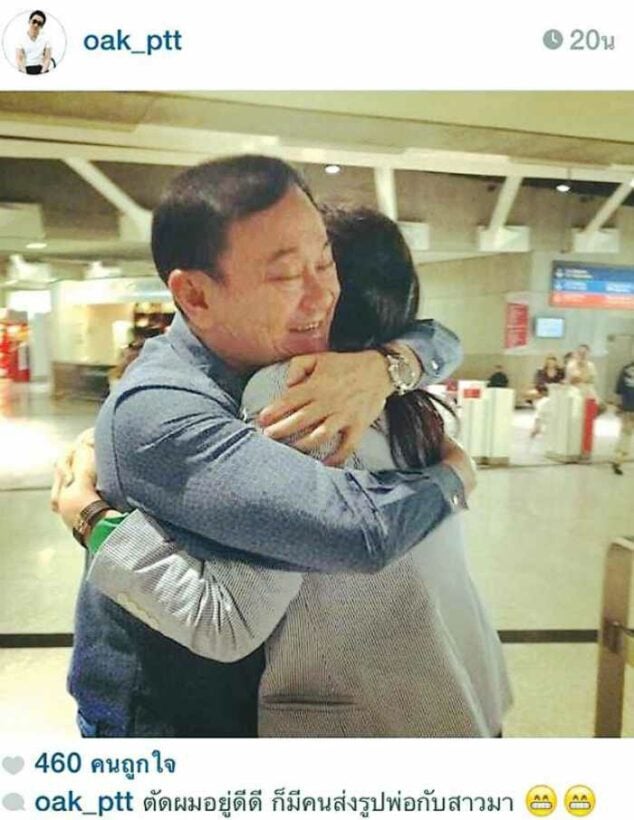 PHUKET: Former PM Yingluck Shinawatra has publicly reunited with her brother former PM Thaksin Shinawatra, who is in self-imposed exile from Thailand. It was the first time the siblings had been seen together in public for almost six years.

Oak Panthongtae, Thaksin’s son, yesterday posted a photo on Instagram of Thaksin hugging a woman who was later confirmed to be Yingluck.

Meanwhile, Thaksin’s youngest daughter Paetongtarn posted another picture with a caption that read, “Brother and sister after not seeing each other for three years. Family is everything.”

The former premier encountered an army of reporters at Suvarnabhumi Airport at 10pm on Wednesday when she arrived to check in for her flight to Paris. Accompanied by her son Supasek Amornchat, she departed Bangkok on Thai Airways International Flight 930, which left for Paris five minutes after midnight.

Yingluck earlier told reporters at Suvarnabhumi Airport that she would return to Thailand on August 10 as scheduled.

“I want to take a vacation. Let’s talk after I’ve come back,” she told reporters.

Yingluck received permission from the ruling National Council for Peace and Order (NCPO) to leave the country on a European trip some time between last Sunday and August 10.

It was reported that Yingluck and those accompanying her travelled to France with 15 items of luggage.

As well as Thaksin’s youngest daughter Paetongtarn, former foreign minister and deputy prime minister Surapong Tovichakchaikul was also seen at the airport. He said he had received permission from the NCPO to leave the country to attend the birthday event and was scheduled to return to Thailand on Sunday.

NCPO spokesman Winthai Suvari said Yingluck’s trip was a personal one. The NCPO considered on a case-by-case basis whether to allow people who had previously been subject to a travel ban to go abroad.

Col Winthai said those permitted to go overseas this time were aware that their trips would attract attention so they would be unlikely to “act inappropriately”.

He said the media should not presume that Yingluck would not return.

In September 2006, Thaksin was ousted from office by a military coup while on a trip to the United States. On February 28, 2008 – some 17 months after he first left Thailand – the ex-leader returned home after the People’s Power Party won the first general election held after the coup and formed a government headed by Samak Sundaravej.

Just two months before the Supreme Court’s Criminal Division on Political Office Holders was due to deliver a ruling in a case against him in the Ratchadaphisek land case, Thaksin sought permission and was allowed to attend the Beijing Olympics with his then-wife, Pojaman. In early October 2008, the court found him guilty of conflict of interest and sentenced him in absentia to two years in jail.

He has not returned since.