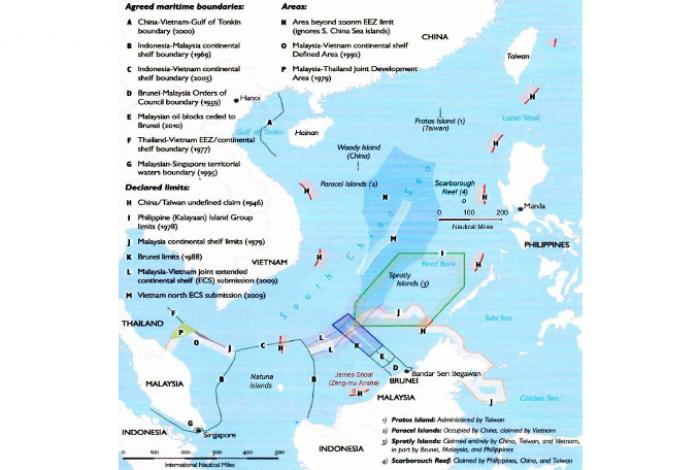 BANGKOK: China’s territorial claims to the South China Sea are expected to be dealt a blow today as the Permanent Court of Arbitration in The Hague (PCA) is scheduled to announce its decision on seven issues advanced by the Philippines against the People’s Republic.

The PCA, one of the world’s oldest and most widely-respected bodies for resolving international disputes, is likely to rule that China’s campaign of island building and its claims over areas of the sea contradicts international maritime accords.

China currently lays claim to some 2 million square kilometers of maritime space through a post-World War II plan known as the ‘nine-dash-line’. Only one of the seven submissions made by the Philippines, an ASEAN member, directly address the legality of Chinese claims. If the PCA found in favor of the Philippines in the other six submissions, it would undermine the legality of Chinese actions in the region.
To that effect, the People’s Republic has refused to take part in the PCA’s deliberations and has actively called into question the legitimacy of the body itself.

The Chinese government has also launched a national media campaign at home, in what appears to be an attempt to solidify government support ahead of international repudiation.

Thitinan Pongsudhirak, director of the Institute of Security and International Studies at Chulalongkorn University, says that the dispute between China and the Philippines is straining relations between ASEAN members, particularly between the more maritime-dependent Philippines and Vietnam and smaller ASEAN states located in China’s back yard.

“In fact, China is drumming up its own international support ahead of the PCA’s imminent decision, including a side agreement with Brunei, Cambodia and Laos that the international ruling will not impinge on ASEAN-China relations,” Mr Thitinan wrote in an op-ed piece in the Straits Times last month .

Should the PCA rule in favor of the Philippines, Mr Thitinan thinks it likely that those side agreements would undermine the unification of ASEAN by driving a wedge between the Philippines and Vietnam on the one hand, and Brunei, Cambodia and Laos on the other.

“The Manila-Beijing contest over the South China Sea has emerged as the most daunting and existential threat to all that ASEAN has achieved as the central linchpin of regionalism in Asia,” he wrote.

The stakes are high, both for China, which is expected to ignore the ruling if the Court finds in favor of the Philippines, and for ASEAN members, as Chinese influence erodes the economic organization’s political cooperation.

More than half the tonnage of the world’s global trade passes through the South China Sea annually, making it the second most used sea lane in the world.

The expected Chinese disregard for the PCA’s rulings and its undermining of ASEAN political unity also threatens claims by Vietnam and other member states to disputed off shore oil fields. The US Department of Energy Information estimates that there are oil reserves of around 11 billion barrels and natural gas of about 266 trillion cubic feet beneath the South China Sea bed.

The PCA has no means of enforcing whatever decision it delivers today. That means that should the Philippines wish to enforce its territorial claims against those advanced by China, it would find itself very much outgunned by the Chinese navy. This may shed some light as to the United States’ decision to dispatch two carrier-groups to Philippine waters over the last couple weeks.

With additional reporting by Wes Martin of the Phuket Gazette.

Truck attacker kills up to 80 in Nice Bastille Day crowd