3 people are dead, including an alleged shooter, after a series of attacks in central Vienna. The Austrian Chancellor Sebastian Kurz described as a “repulsive terror attack”. One suspect was “shot and killed by police officers”, according to Vienna police.

A woman wounded in an attack in central Vienna has since died of her injuries. Her death briought the civilian toll to 2.

Gunshots were first fired around 8pm, local Vienna time, beginning in Vienna’s centrally-located first district. Bars and restaurants were crammed with people enjoying their final moments of total freedom before a new lockdown was imposed to slow the spread of Covid-19 in Austria and other parts of Europe.

The shooting began just hours before Austria was to re-impose a coronavirus lockdown to try to slow the spread of Covid-19, and bars and restaurants were packed as people enjoyed a final night of relative freedom. Police report that there had been 6 different shooting locations and urged people to stay in their homes whilst security officials contained the situation.

Austria’s Interior Minister says that the incident “appeared to be a terrorist attack”. The EU’s Council chief Charles Michel said that the bloc “strongly condemns this cowardly act”.

Sirens and helicopters could be heard as emergency services responded to the incidents around the city.

The location of the incident where the alleged shooter was shot is close to a major synagogue.

Members of the local Jewish community say that shots had been fired “in the immediate vicinity” of the Stadttempel synagogue. Both the synagogue and the office buildings located in the same building had been closed at the time of the attack.

The City of Vienna tweeted confirmation that children would not need to attend school tomorrow (Tuesday Vienna time).

“Due to the current situation, there will be no compulsory education in Vienna tomorrow. Children can therefore stay at home, excused. For all those for whom this is not possible, the schools are of course open. Stay safe and above all healthy!” 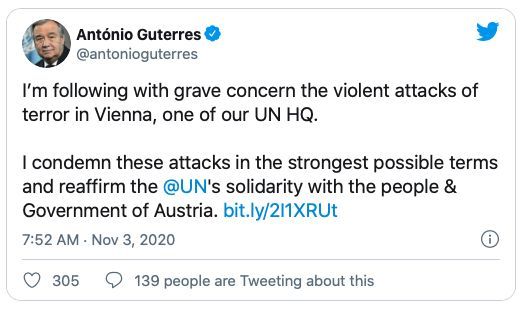 “There is no room for hatred and violence in our common European home.”