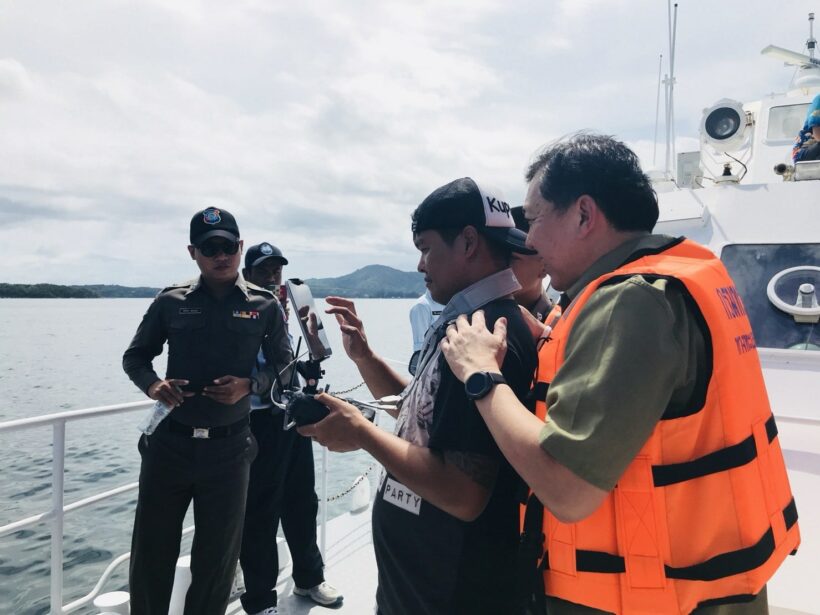 Yesterday (May 20) a team of officials led by Department of Marine and Coastal Resources (DMCR) Director-General Jatuporn Burutpat went in search of the whale shark that fisherman claim was alive after they freed it from their fishing nets. The searching covered 40 kilometres between Koh Lon, Koh Hey and Koh Bon. Binoculars, drones and echo sounding devices have been used in the search.

Mr Jatuporn says, “So far no whale shark has been found. The search will continue for about four days. If we find the live whale shark, it will be treated and released back to the sea. If we locate a dead whale shark an autopsy will be conducted to find the cause of dead and included in the legal case against the fishermen, the crew and the owners of the boats.

“Not more than 100 whale sharks have been seen in the Andaman Sea or the Gulf of Thailand which is a small number. Most of the dead whale sharks found have died from fisheries activities. “

“The captains of ‘Sang Samut 2 and 3’ fishing boats and the 15 boat crew are to face charges. We are paying attention to the plight of rare animals, but we also need cooperation from everyone involved. I want this incident to be the first and last time.”

Dr Kongkiet Kittiwattanawong, Chief of the Marine Endangered Species Unit at the the Phuket Marine Biological Centre (PMBC) says, “The chance that we will find this whale shark alive is low. Whale sharks have soft bones. If they were brought up onto the boat, its organs inside are most likely injured.”

Boat crews got into the water to help the 1.5 tonne whale shark out of a fishing net Krabi this month .