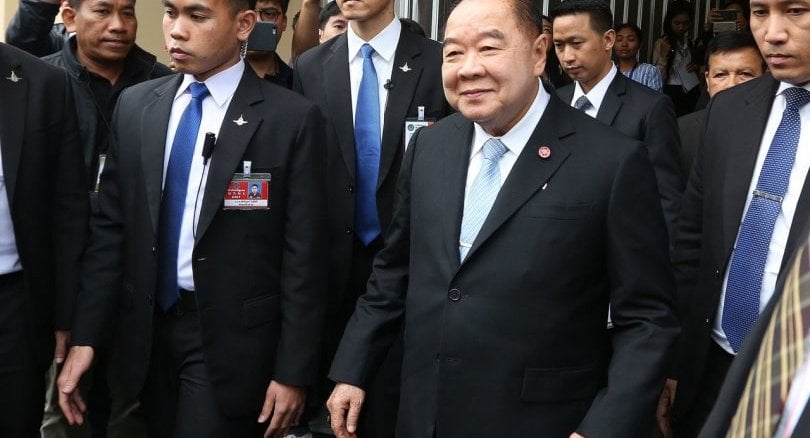 Deputy Prime Minister Prawit Wongsuwan would not be required to declare his extravagant watch collection as assets under the anti-graft law if the watches did not belong to him, National Anti-Corruption Commission (NACC) secretary-general Worawit Sukboon said yesterday.

At an NACC press briefing yesterday, Worawit said that if the watches belonged to Prawit, he would have to explain when he obtained them. If Prawit had obtained the watches before he took government office, he would have to explain why he had failed to list them in his assets declaration, he added. If he acquired them after entering the Cabinet he would not have to declare them until he left, Worawit said. “Assets subject to be declared to the NACC must ‘belong’ to the person. Theoretically, if [the assets] do not belong to the person, his spouse, or his minor children, they won’t need to be declared,” said Worawit. The explanation on the legal requirements came after weeks of investigation into Prawit’s luxury watches.

The controversy sparked off in early December and continues to capture the public’s attention, as the number of watches seen on the general’s wrist over time grew from one to more than 20.

The combined worth of the watches is believed to exceed 20 million baht. Questions have arisen over how he obtained the expensive items given the income of a retired general and whether he had declared them to the NACC before his incumbency. Prawit, joint junta leader and defence minister, has been asked to clarify the origin of the watches following the emergence of dozens of photos showing him wearing fancy watches on many occasions.

The secretary-general has refused to disclose any further detail regarding the ownership of the watches. If the watches were a loan, some critics question whether Prawit had breached the law that prohibited government officials from receiving gifts worth more than Bt3,000. Worawit said NACC officials would look at all the legal aspects of the case. While there was some concern that the loan explanation would become a new stock argument for politicians concealing assets, Worawit said the agency would not necessarily regard this type of defence as valid. Worawit also said yesterday that the NACC president, Pol General Watcharapol Prasanratchakit, had announced in a meeting on Tuesday that he would withdraw from the panel probing the case. This was despite the fact that he was neither a stakeholder, nor did he have any reason to be disqualified under the charter, the secretary-general said.

Watcharapol has come under pressure since the scandal broke. The NACC president in 2014 had worked in the coup-installed government, closely under Prawit. The public has demonstrated distrust in the scrutiny of the junta leader with Watcharapol at the helm. A brief scuffle also broke out at a press briefing after a solo pro-democracy activist Ake Auttagorn showed up unexpectedly and gave a picture to Worawit.

The pictures showed Napoleon the pig from George Orwell’s political allegory “Animal Farm”. There was also an image of “three wise monkeys” wearing diamond rings and watches. Ake was quickly removed from the press conference room. In the novella “Animal Farm”, Napoleon is a leader in the movement to overthrow the human ruler of the farm. He promises to make all animals equal and says he will never be like the oppressive men. But, after a while in power, Napoleon adopts human mannerisms and becomes “more equal” than the other animals.

Prawit, meanwhile, kept quiet and was guarded by six military aides who kept him away from reporters.