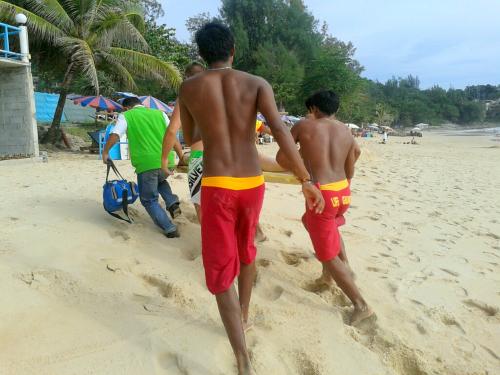 Phuket’s Governor Norapat Plodthong hosted a meeting at the provincial hall today (September 28), gathering all local authorities, including the Tambon administration organisation with defence volunteers and Royal Thai Navy area 3, to discuss about the beach security measures after the Phuket Lifeguard Company finishes its contract on Saturday night.

The Governor says the team of defence volunteers, working with the support of the navy which provides a diving team along with onshore, offshore and aerial patrol officers, will supplement interim arrangements.

“As we prioritise the safety of all beach goers, there must always be lifeguards at each beach around Phuket. 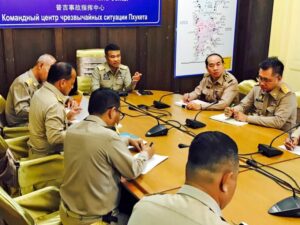 Meanwhile, Acting Chief of Phuket OrBorJor (Phuket Administration Organization), Watcharin Pathomwattanapong, revealed that the OrBorJor will hire the same company directly after the contract ends (without auction) with the wage of 14,000 Baht per lifeguard per month while waiting for the new auction draft.

Phuket Vice Governor, Sanit Sriwihok added that the high season is coming soon and there will be a lot of Chinese tourists during their national holidays.

“From October 1-10 is Chinese National Day celebrations. According to tourism statistics, there is usually an influx of about 300,000 Chinese tourists coming to Thailand and at least 50,000 of them will be in Phuket during that period. Safety measures must be our priority,” said the Vice Governor.

Maya Bay being closed for three months next year