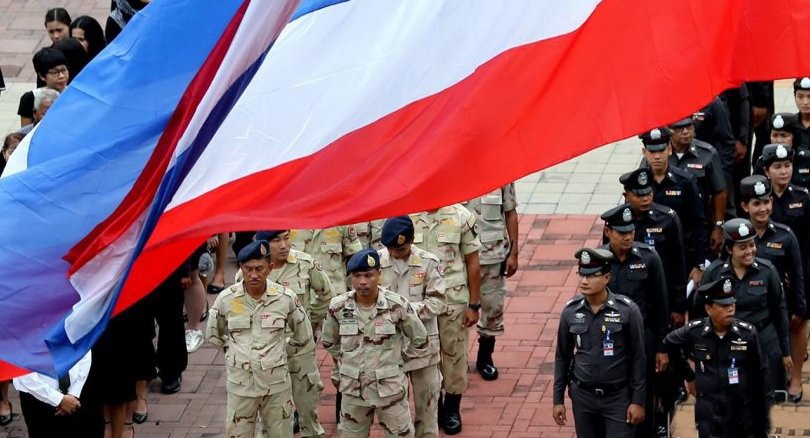 Citizens across the country united in singing the national anthem at 8am on Thursday to celebrate the centenary of the national flag.

The Cabinet has designated September 28 as annual National Flag Day, though it is not a public holiday.

As the day is celebrated for the first time this year, the hope is that the flag will be flown throughout the country in honour of King Vajiravudh (Rama VI), who in 1917 replaced the historical Siamese flag showing a white elephant on red background with the flag in general use today, with its familiar red, blue and white stripes. 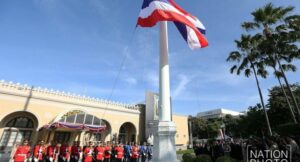 Prayut is urging citizens to learn about Thailand’s history and remember what their forebears did to protect the homeland for future generations.

He said history must be taught in schools, noting that the past laid the foundation for both the present and the future.

“What we are doing today will be history in the future, so if we keep the country in order, the nation can move forward and develop with no obstacles,” the premier said. “It is like we are creating a history for the children of the future.”

He urges everyone to do good deeds and realise the importance of this day.

The Royal Thai Navy marked the flag’s 100th anniversary at a ceremony at the Wang Nanthautthayan Club. Officers sang the national anthem while raising a specially designed flag on the same pole where the original flag was hoisted for the first time a century ago.

The Navy’s flag superimposes the original elephant motif over the modern striped pattern.

Similar ceremonies were being held across the country, including in Songkhla, Nakhon Ratchasima and Ang Thong, with state officials and other citizens singing the national anthem and raising the flag at 8am.