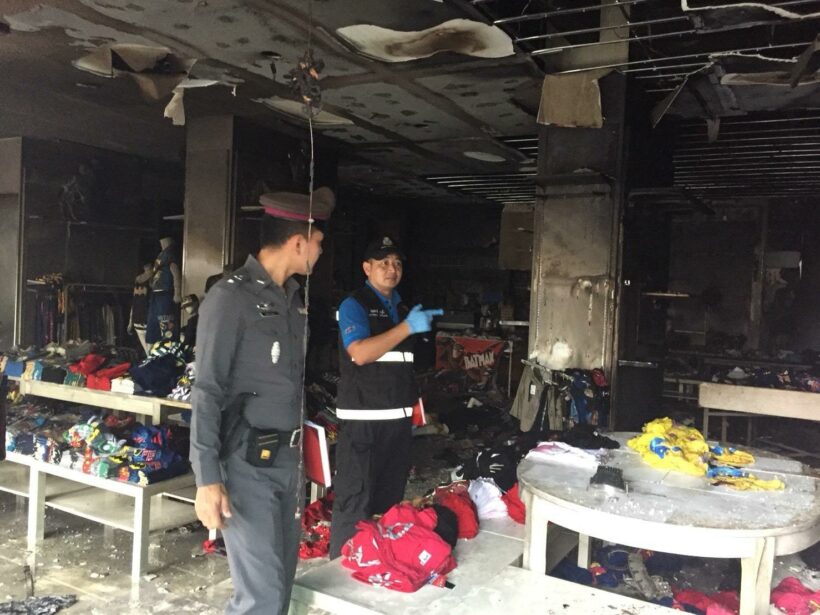 Forensic police believe that the fire at the Hollywood Studio Store started from an electric short circuit in the ceiling of the shop.

The fire at the clothes shop on the ground floor of Paradise Multiplex, Ocean Shopping Mall, that destroyed much of the shop’s contents on the night of April 23 resulting in at least 2 million Baht damages, is being investigated by forensic police and Phuket Municipality officials.

Forensic police say that the fire could have started from the ceiling and spread to the lower floor area and is believed to have come from an electric short circuit. The first zone that police believe was where the fire started, was completely damaged and has been separated from the other zones, which were effected by fire and water that can be cleaned up.

Before the fire started, Police noted there was a transformer explosion on an electric pole in front of the shop around the time of the fire, and the electricity in the nearby area was off. Police are contacting the Phuket PEA to check if the incident can be related to the fire or not.

The Deputy Phuket Mayor, Thavorn Jirapattanasopon, says that officials from the engineering unit of the municipality are also checking the structure of the shop’s building after the fire.

Gambling crackdown ahead of World Cup