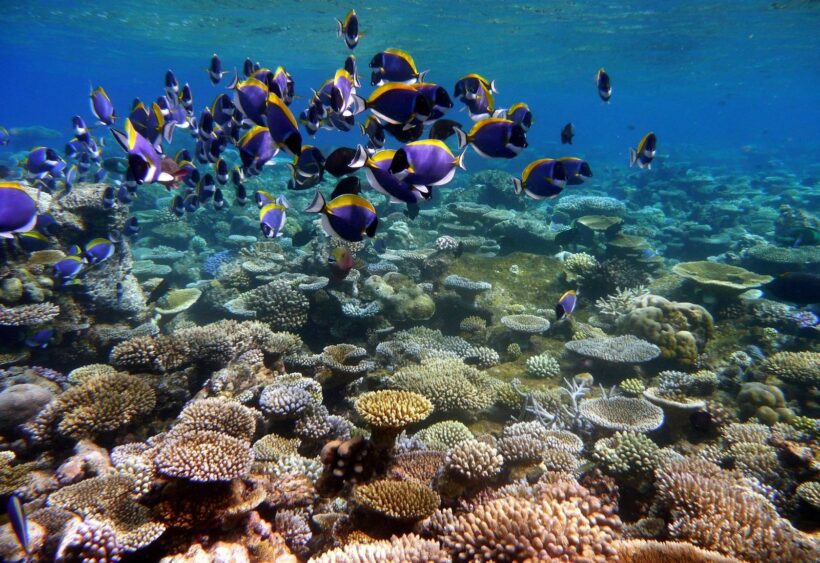 More coral reefs in Thailand’s seas are suffering from mass bleaching as the result of continuous warm seawater.

A special task force to tackle coral bleaching has been set up by the Marine Science Association of Thailand to monitor the bleaching problem and suggest mitigating measures.

Many reports of coral bleaching have been shared by the Facebook group “Thai Coral Reef Network” and local marine scientists since last weekend, showing coral bleaching this year has already spread over a wide area, especially in Gulf of Thailand, where the seawater temperature has reached as high as 32 degree Celsius.

According to the heat tolerance ability of coral in this region, bleaching will start when the seawater temperature rises beyond 30C for more than three weeks.

Former marine scientist at World Wildlife Fund Jirapong Jeewarongkakul said that due to the prolonged period of temperatures up to 32C at Koh Talu in Prachuap Khiri Khan, 5 to 10 per cent of corals in the area are already bleached.

Jirapong’s pictures from Koh Talu showed that many big staghorn coral had started to turn white, which signified the early stage of coral bleaching.

He also said that about 5 per cent of the corals at Koh Man Klang in Rayong were also damaged as the seawater temperature rose to 32C for several days.

He said if the seawater temperature does not cool soon, more corals may be damaged from bleaching and some may eventually die.

Sithiporn Pengsakul, marine biodiversity researcher from Ramkhamhaeng University, said that the southernmost coral reefs in the Gulf of Thailand at Koh Losin in Pattani also suffered from minor bleaching, as the seawater temperature was at 30C to 32C and 5 to 10 per cent of corals showed early signs of bleaching.

The Marine Science Association of Thailand on Monday announced the establishment of Thailand’s Coral Bleaching Taskforce 2018 to gather information on this year’s coral bleaching problem and provide suggestions on the proper ways to deal with the current situation and prevent further damage.

The association said that although coral bleaching might be considered minor this year, water pollution and excessive tourism activities can aggravate the situation and disrupt the recovery of the coral reefs.