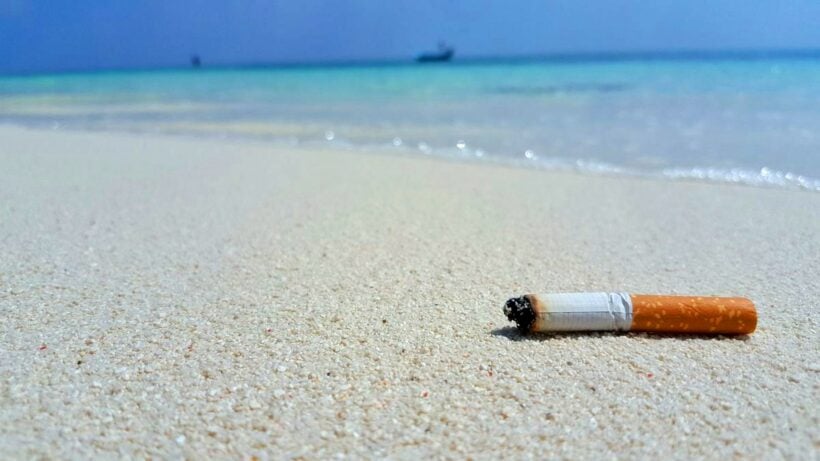 After finding a large amount of cigarettes on Patong Beach following the results of several volunteer beach cleans, the Director General of Marine and Coastal Department announced that from November onward, the department will enforce the law – Section 17 of Marine and Coastal Management Promotion Act – to prohibit smoking on the beach.

“After collecting trash from Patong Beach, we found that there is an average of 0.76 cigarette per square metre, with a total 101,058 collected so far. This is a serious problem,” said the Director General.

“Cigarettes have direct effect on the natural environment. The butts clog the drains contributing to floods. When the cigarettes stay under the beach sand for a long time, it also negatively affects the eco system. And then when the chemicals from the cigarette butts reach the water, it also releases cadmium, lead, arsenic and some acid from insecticide which are poison to the natural food chain.

“From this November, we will enforce the law and we have already selected the first 20 beaches that we will control, such as Patong Beach, Koh Khai Nok Beach, Koh Khai Nai Beach (Phuket), Hua Hin Beach, Cha-Am Beach, Khao Takieb Beach (Prachuap Khiri Khan), Pattaya Beach, Jomtien Beach, Bangsaen Beach (Chonburi), Samila Beach (Songkhla) and others we are announcing in the next few days.

“In the future, the law will be enforced in every single beach across Thailand. Anyone who breaks the law will face 1 year in jail or a maximum of 100,000 Baht fine, or both,” he explained.

He added that apart from the smoking prohibition on the beach, it is also illegal to smoke offshore on boats as they found a large number of cigarette butts were collected from underwater. Regarding this enforcement, the department will discuss with the Marine Department to arrange strict enforcement.