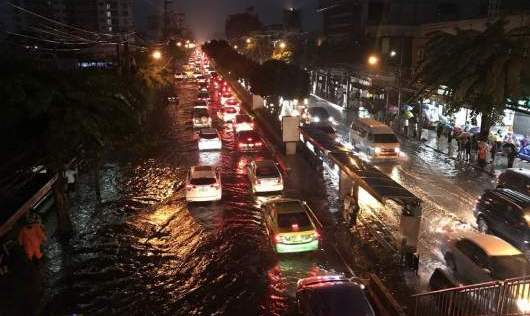 Several parts of Bangkok were deluged on Wednesday morning because water pumps were undergoing maintenance and a flood-drainage system isn’t yet completed, the Bangkok Metropolitan Administration’s Flood Prevention Centre said.

The centre, seemingly caught off guard by the unseasonal early-morning rainfall, issued a statement explaining its unpreparedness.

Specifically, it said it was seeking funds to build a pumping well on Sukhumvit Road at Soi Bearing and was currently constructing a flood tunnel from the Saen Saeb Canal to Soi Lard Parod 130. The centre said the heaviest rainfall Wednesday was in Nong Chok district, measured at 133 millimetres, followed by Bang Na with 109.5mm and Minburi with 104mm.

Meanwhile in Samut Prahran, soldiers were helping police sort out the traffic mess on Wednesday morning after several main roads were inundated following the off-season downpour.

Traffic was almost paralysed along Sukhumvit Road in front of the North Samrong police station in Muang Samut Prakan and at the Poo Chao Saming Prai intersection. The water in both places was 30 centimetres deep. Srinakharin Road at the Sri Thepha junction was 20-30cm underwater. Srinakharin from Soi Bearing to Soi Lasalle was 40cm underwater. Police led by Pol Lt Col Sathit Samarnparp of North Samrong station and members of the Second Battalion of the the Second Infantry Division were directing traffic at the main intersections. 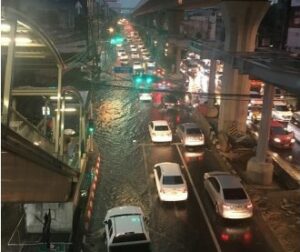 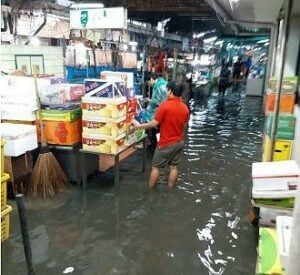 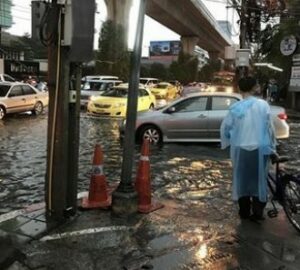 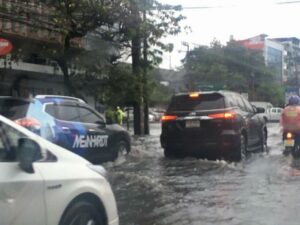 THURSDAY MORNING HEADLINES – All your news in 3 minutes