Fugitive ex-prime minister Yingluck Shinawatra was seen in a photo with her brother Thaksin, also a fugitive ex-PM, buying chestnuts in Beijing, China.

The photo was published on Matichon Online website on Saturday afternoon. The two siblings were buying chestnuts in a mall in Beijing as part of Chinese New Year celebrations on February 16, Matichon reported. Thaksin’s youngest daughter, Paetongtarn, posted two photos of her father on her Instagram not long after the other pictures were released on the Matichon website.

“My dad wishes all Thais a happy Chinese New Year from Beijing in advance. Although we are far away from each other, I always miss you, don’t you know?” Paetongtarn wrote on her Instagram account, @ingshin21, on Saturday. Yingluck fled the country in late August before a court was due to read its verdict on a negligence of duty case related to her government’s controversial rice-pledging scheme. In September, the court sentenced her to five years in prison. 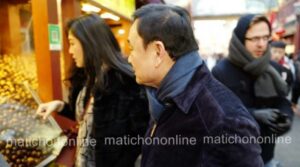