State Railway of Thailand officials and workers were clearing the tracks today (Thursday) after a Bangkok-Trang express train derailed this morning a few kilometres from the Trang Train Station.

No one was killed or injured in the incident, railway engineering official Chairat Duansung said.

The derailment, which led to the 14-car train’s last carriage going off the tracks, took place at 9.30am in Bang Wang Trae (Moo 7) of Tambon Na Tuam Nua in Muang district at a bridge under construction at a curve in the track.

The derailment caused the train to stop 50 metres from the bridge and seven kilometres from Trang Train Station. 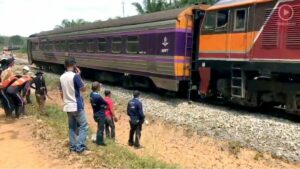 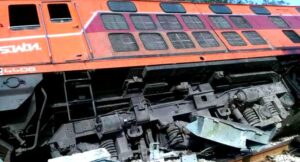 The engineer and other personnel quickly moved passengers out of the last car, which they then decoupled from to continue their journey, reaching Trang station at 9.45am. Removing the carriage and repairing the track would take until 5pm on Thursday, Chairat said.

During the repairs, passengers on a Bangkok-Kantang train were transferred by bus to the Thung Song Train Station in Nakhon Si Thammarat to continue their journey to Bangkok. The damage was initially estimated as 50,000 baht, a source at Trang Train Station said. 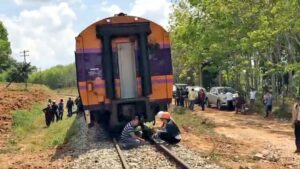