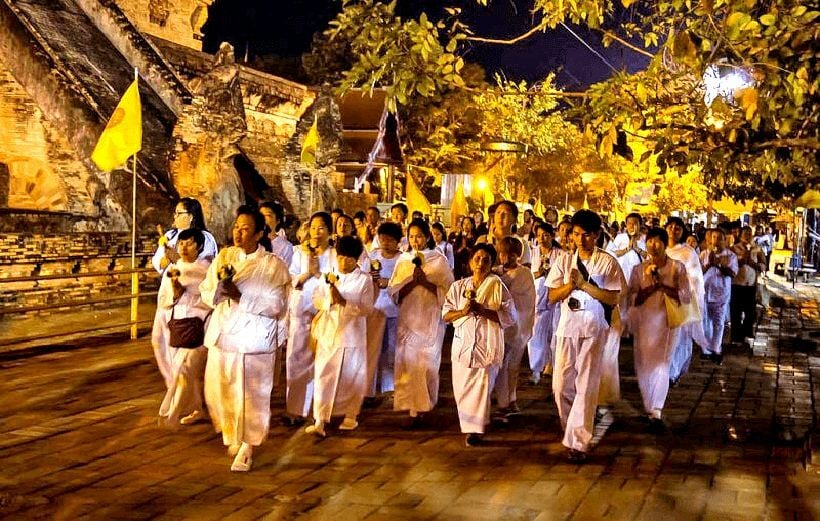 This year’s Visakha Bucha Day is part of a longer 4 day long weekend. On Friday it was Ploughing Day, a traditional day commemorating Thailand’s agricultural history, and always attended by members of the Thai royal family.

This year, the Royal Ploughing Ceremony was held at Sanam Luang public park, in front of the Grand Palace in Bangkok. It marks the official start of Thailand’s rice-growing season. The ceremony was presided over by Their Majesties the King and Queen of Thailand. This year predictions were made, including “abundant water and a prosperous economy” with chances of flood damage in low-lying farmlands.

But the Sunday and Monday of the 4-day long weekend are the most sacred day on the Buddhist calendar.

Visakha Bucha Day commemorates 3 defining events in the life of the Lord Buddha… his birth, attaining enlightenment at 35 years old, and then his death 45 years later, which all occurred on the full-moon day of the sixth lunar month, according to Buddhist history.

Visakha Bucha Day is one of the most important Buddhist holidays in the Thai calendar and this year it takes place on May 26, 2021. It is important as it was the day of three important incidents that occurred during the life of Lord Buddha. They all happened on full moon of the sixth lunar month.

Traditionally, Buddhists gather at temples to perform the ‘wian tien’ ritual, walking in circles 3 times around the main temple building with lighted candles.

Buddha was born in Nepal some 2,500 years ago as a rich prince, but he left that life of luxury to seek out wisdom from the wise hermits who lived in woodlands scattered throughout the region at the time. He felt disappointed, however, and instead meditated under a Bodhi tree. There, he is believed to have attained enlightenment at the age of 35 and to have formulated the basic tenets of Buddhism.

Later, at age 80, he died. Buddhists believe he then entered the state of “nirvana” and escaped all suffering, death, and reincarnation.