26 Chinese tourists have a lucky escape 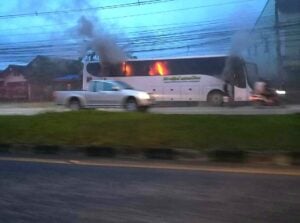 Police are speaking with the bus driver and witnesses as emergency service volunteers clean up the mess from last night’s bus fire in Koh Keaw. 26 Chinese tourists had a lucky escape after their tour bus burst into flames as they were headed southbound along Thepkasatri Road around 6pm last night, just opposite the the Isuzu Showroom. The group were returning from a trip to the islands and headed for their hotel. The tour group had only arrived in Phuket the night before.

The driver smelt smoke coming from the engine compartment, pulled over and got all the passengers off the bus before the fire started engulfing the vehicle. Local villagers came to the rescue with chemical extinguishers but it wasn’t until emergency services arrived that the blaze was brought under control. 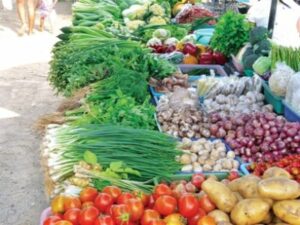 More than 60% of five “popular vegetables” we buy in local markets contain excessive level of harmful chemical residues. This, according to a testing by Thailand Pesticide Alert Network (Thai-PAN), a non-governmental organisation working on food safety.

For local vegetables, 43% of them had chemical residues and for local fruits, 33% exceeded the allowable limit for pesticides.

Bio Thai is also suing the Department of Agriculture for failing to protect consumers by allowing the use of paraquat for six more years despite a proposal by the Public Health Ministry to ban the weed killer due to reported health hazards. 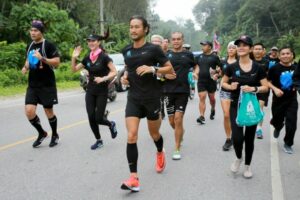 Bang Saphan is a special district for Toon and his team as it was where they first launch the charity run to mobilize donations for Bang Saphan Hospital in December 2016.

A special show with more than 500 performers was was put on for Toon and his support team last night. The 38 year old headed off at 4am this morning, heading north for Hua Hin, from the Green Sea View Resort.

More rain forecast up to Tuesday

Continuous rain is likely with isolated torrential downpours in 12 southern provinces, including Phuket, until Tuesday as the strong northeast monsoon prevails over the Gulf of Thailand and the South.

Waves in the Gulf of Thailand and the Andaman Sea are likely to be 2-3 metres high according to the Thai Meteorological Department.

Over 1.8 have visited Sanam Luang so far 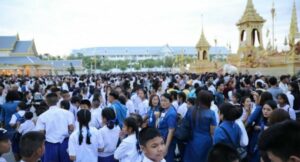 There have been long queues for people to enter the Royal Crematorium ground in Sanam Luang in Bangkok, to see the exhibition of the Royal Cremation rites of His Majesty the late King Bhumibol Adulyadej.

Students, monks, nuns, the elderly and the disabled were queuing up from 4am each day since the complex opened for public viewing on November 2. The first group of entries starts at 6 am each day.

The Culture Ministry announced yesterday that over 1.8 million people had visited the Royal Cremation ground between November 2 to 24.

Pattaya tourist police have rounded up 22 Thai women and transvestites on Pattaya and Jomtien beaches early on Saturday and fined them for soliciting sex from customers.

The women and transvestites were all taken to the Pattaya police station to be fined and photographed for police records. Police made the arrests after a female Russian tourist filed a complaint that a transvestite stole her iPhone 6 after approaching her at a bar in ‘Sin City’. The Thai government have been trying to clean up Pattaya’s reputation for sex tourism and turn the party town into a respectable family destination in recent years. We wish police the best of luck with that!