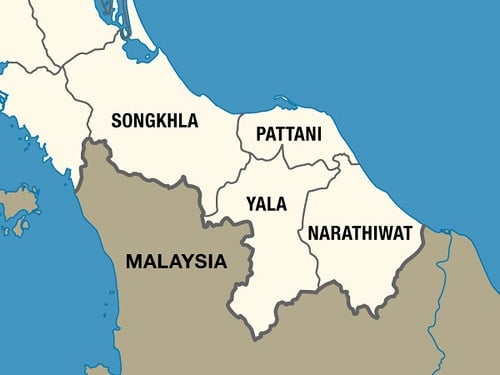 In the aftermath of a truck robbery in which one hostage and one suspect were killed, officials are now floating the idea of reintroducing martial law in the southern provinces – specifically districts in Songkhla.

Thavorn Senniam, former deputy interior minister and former member of Songkhla’s House of Representatives, says that the government should consider declaring martial law in some of Songkhla’s districts.

Four districts were under martial law since January 2004 but it was later lifted in 2010 and replaced by the National Security Act, which Thavorn says is too weak and blames the current Act for the upsurge in southern violence.

On Wednesday morning (August 16), seven gunmen raided a car dealership in Songkhla’s Na Tawee district. They stole five cars and abducted four men, including the business’ owner. One hostage was shot to death. Another was badly injured by a gunshot wound while two escaped to seek help from police.

The far-south provinces of Narathiwat , Yala and Pattani have been the most violent provinces in the long-running Muslim insurgency but recent attacks have moved further north, worrying police about security in the region.