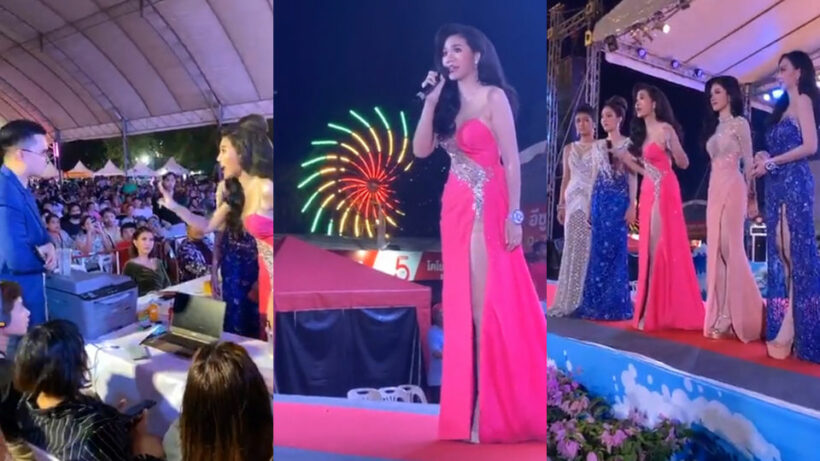 A beauty pageant came under fire after 10 contestants were all declared the winners, ending the Miss Samila 2020 early after a contestant accused the judges of rigging the scores. The 10 finalists split the 200,000 baht of prize money and the top 5 contestants got an extra 10,000 baht. A good deal for those who would’ve lost, bad for those who had a shot at first place and could have been crowned Miss Samila.

Thailand has a penchant for the rather tawdry beauty pageant format with hundreds of pageants and contest around the year, many raising money for local charities and providing an opportunity for contestants to get out the glitter and glamour frocks.

49 women competed in the Miss Samila 2020 pageant in the southern province Songkhla. Things got heated during the semi-finalist round. 10 contestants were left and only 5 of them would go on to the final round. But when judges cut the 5 contestants, 1 of them demanded to see the scores.

“I would like to speak on behalf of all who were eliminated. We have experience gained from other contests, and we know from answering the questions (from the judges) that we should get high scores and go through.”

The crowd cheered. A video was taken of the contestant, Oraphan Na Chiang Mai, confronted the judges and it was shared on TikTok and YouTube (below).

But the judges refused to release the scores. Instead, the pageant organisers decided to end the contest early. Splitting up the prize money equally and giving an extra 10,000 baht to those who were supposed to move onto the final round.Pageant organiser Pawaris Hayeama says it was an amicable decision.

Role through to around 2.30 if you want to see some of the fireworks…

“The judging of this beauty contest has been improved to conform with international standards.”

The controversial decision to declare 10 winners of the pageant has some saying they’ve lost respect for the well-known beauty contest.

“The contest was famous, but nobody will join it from now.”

“Judges should be ashamed of themselves. The contest has become infamous.”

“If it ended this way, don’t have the event next time. The image of Samila has been damaged.”