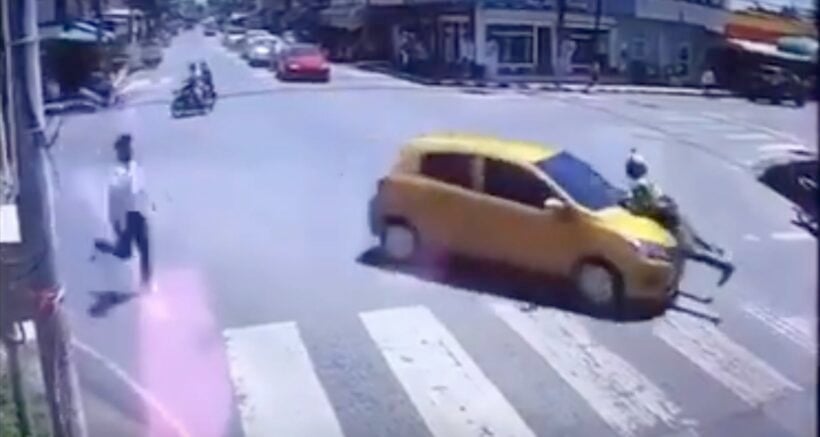 A policeman in the southern province of Nakhon Si Thammarat was taken on an unplanned car ride  yesterday when a Mitsubishi Mirage tried to run him down, forcing him to jump onto the front of the car and hold on for about 2 kilometres. The incident was caught on security cameras. 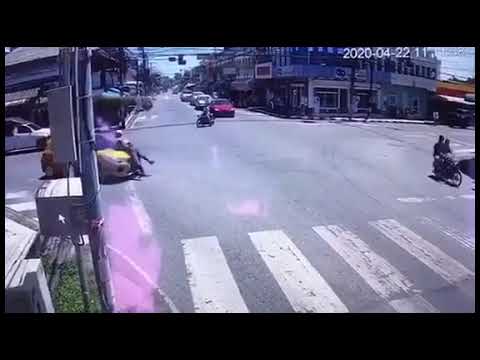 Officer Montri Nitichai of Tha Sala police station says he was on his motorbike waiting at an intersection when the yellow Mitsubishi hit the rear of his bike. The impact wasn’t hard and he got off the bike to talk to the driver, at which point the driver accelerated toward him, forcing him to jump onto the hood of the car. The car then drove for about 2 kilometres with him hanging onto the front of the car for dear life!

The driver finally stopped the car suddenly, throwing Montri off, then sped away leaving the policeman on the ground, according to the Bangkok Post.

Fellow officers who questioned the shaken policeman say the officer couldn’t see the driver’s face clearly as he was wearing a baseball cap hiding his face. He also said he had other things to worry about at the time besides getting a good look at the driver. Neither he or any witnesses saw the car’s license plate.

Police say they’re try to identify the driver and track down the car with surveillance camera footage.