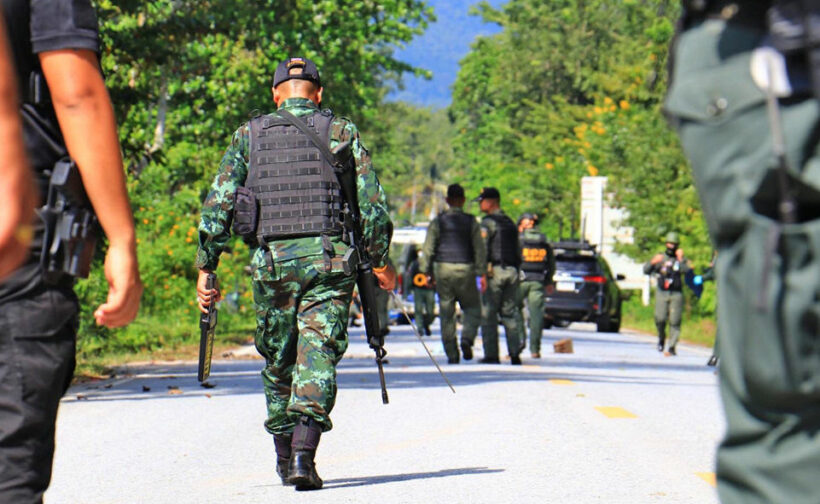 The village guard system, used as part of the local volunteer security in the Deep South of Thailand, is set to be completely reviewed, or replaced by a more mobile system where village defence volunteer units will be on regular patrol to seek insurgents, instead of being a “sitting duck”.

15 volunteers and villages were killed after a deadly, and well co-ordinated, insurgent raid late on Tuesday night. Security officials estimate that more than 10 insurgents carried out the brutal surprise attack.

The overhaul of the system was announced yesterday by Lt-Gen Pornsak Poonsawat, commander of the 4th Army Region, following a deadly raid by insurgents on the Ban Thung Sadao village defence unit in Muang district of Yala province on Tuesday. A number of others were also seriously injured and remain in hospital.

Lt-Gen Pornsak says that the stationary village guard system has made the volunteers an easy target for insurgents and is in serious need of an immediate revamp to prevent a repeat of the carnage. He also confirmed at the families of the victims will be provided with 500,000 baht each as initial compensation.

During the surprise attack, insurgent militants ambushed the volunteer unit, doing nothing other than sitting and having a meeting at the time, shooting them, stealing their weapons, and then cutting off escape routes or access to the scene by emergency services or army.

“From now on, they (the defence volunteers) must be on the move. They must not camp out in the jungle, but must sleep in the basements of each other’s houses. We can’t afford to be a sitting duck, otherwise they will all be killed,” said Lt-Gen Pornsak.

One community leader of Tambon Lam Phaya told Thai PBS that there were about 20 defence volunteers at the outpost on Tuesday night, attending their weekly meeting to discuss their work plan.

All 15 victims killed in the attack have already been buried in accordance with Islamic tradition.