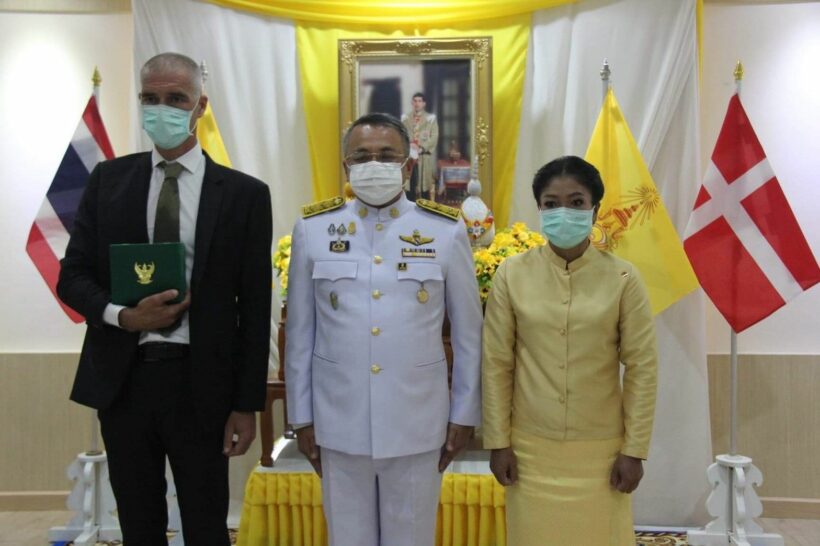 2 foreign diving instructors in Koh Tao were honored for their role in rescuing the 13 young men from the flooded Tham Luang cave in Chiang Rai back in 2018.

More than 100 foreigners involved in the rescue have been granted the Most Admirable Order of Direkgunabhorn, an award granted by the Thai Monarch. A ceremony in Surat Thani was held for the 2 local divers yesterday. The province’s governor awarded Elik Brown from Canada and Ivan Karadzic from Denmark, who are both diving instructors in Koh Tao, with the royal decorations.

Relive the magic moments, and sacrifice, that led to the rescue of the 13 young men at Tham Luang HERE.

On June 23, 2018, the Wild Boar (Mu Pa) football team were wandering through the Tham Luang cave in Chiang Rai when it started to rain outside. Water inside the cave quickly rose and the boys, all around ages 11 to 16, and their 25 year old coach became trapped in a remote area of the cave. What started as a casual after-training expedition ended up as a huge news story as people from around the world eagerly awaited good news from Northern Thailand.

The search took a week. Divers from all over the world helped in the search. 2 British divers found the boys on a dry perch 5 kilometres from the mouth of the cave. The rescue process took another week and involved a lot of quick thinking and innovation from the rescuers and divers. There was always a high risk that they may not extract the 13 alive.

The mission was eventually successful, but dangerous. A former Thai Navy diver died while placing oxygen tanks along the rescue route. Divers rescuing the boys needed to learn how to administer anti-anxiety medications to the boys keep them calm while they were being carried underwater through tight passages.

Mr Karadzic said he was “delighted and overwhelmed” that the diving teams received special recognition from the Thai Monarch.

Democrat MP gets 2 years in prison for vote buying