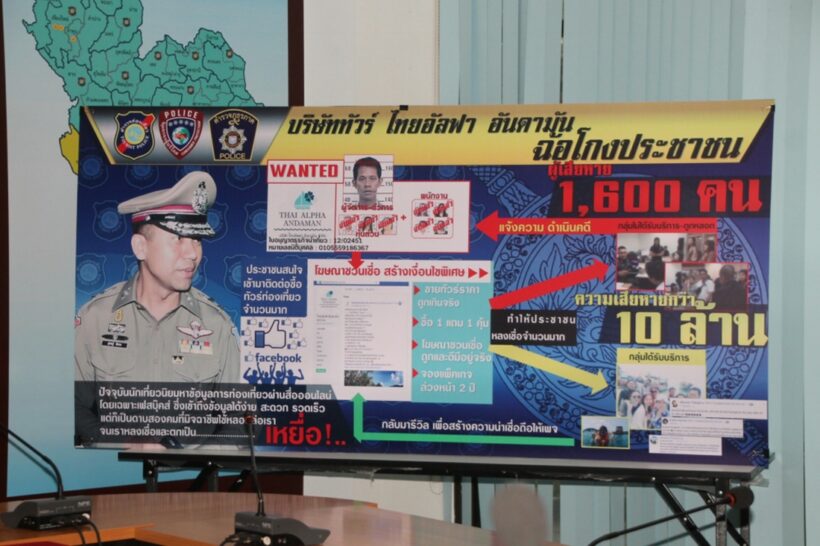 The six women were arrested on Sunday under warrants issued on April 11 by the Satun Court over charges of public fraud and illegally operating a tour business resulting in damages to tourists.

The case also has two male suspects – company owner, 51 year old Thorn Kaewkrai who was arrested on March 26, and the elusive company manager, 43 year old Pratheep Kaewnont.
Surachet said the police investigation discovered that the company was owned by Thaworn.

They learned that Pratheep was wanted in a series of other public fraud cases and had served a 2014 jail term over fraud committed when he managed a Krabi resort.

Prathep served as the tour company’s manager and reportedly was the key player in this recent wrongdoing, Surachet said. The case at first stemmed from a police complaint filed on March 24 by 44 Thai tourists at Satun’s Koh Lipe police station. The complaint claimed that the tourists were allegedly duped into buying a tour package to visit Koh Lipe from Thai Alfa Andaman Co via its Facebook page but they didn’t get the services as advertised, Surachet said.

The police probe later found that up to 1,600 people (including the 44 plaintiffs) might have been victimised in the alleged fraud, resulting in damages worth 10 million baht, he said.

To date, 200 people have stepped forwards to file fraud complaints, resulting in the arrest being issued. One victim in her 30s, Benjaporn (last name withheld), recalled that she and four friends wanted to visit Koh Lipe. They found the tour company online with 150,000 “followers” and some 100 good “reviews” of services and so had bought a tour package for 7,990 baht with a “buy 1 get 1 free” promotion. The group paid about 20,000 baht in total for the March 23-25 visit, said the victim.

The group were picked up by a van at an airport and sent to a pier to board a ferry to the island and took in a diving session at Koh Khai, she said. Their hotel later told them that the company had not paid for their accommodation and they were therefore on the hook for paying from their own pockets, as well as the van and ferry fares, and diving service fee for a total 23,000 baht. This meant they had paid 43,000 baht for the trip, she said.

They found another five groups totally 39 people who had a similar experience with the company. Their inquiry to the company’s office received a reply that the company owner and executives had disappeared and not paid their employees, she said. Thaworn told her by telephone that he was experiencing financial problems and so was asking customers to cover the expenses and he would pay them back, she said. After that, they lodged the police complaint.

Two dead, 892 homes damaged by storms in the Northeast