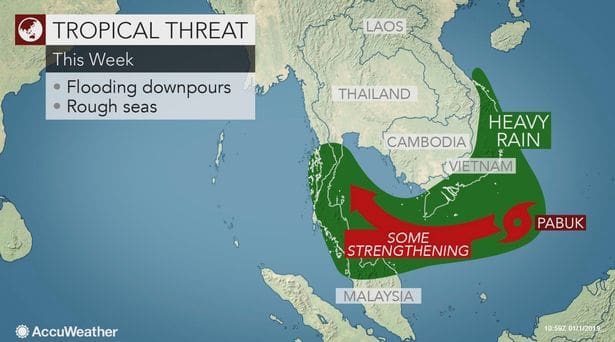 The mirror.co.uk is reporting that there are fears for residents and tourists on Koh Samui as the island braces for the onslaught of tropical storm Pabuk.

Pabuk has formed within a mass of thunderstorms and could be the first cyclone to hit Thailand in January in 68 years.

Southern Vietnam has already been hit by torrential rain and the cyclone is now en route to hit southern Thailand with winds of up to 90 kmh set to batter the south coastal provinces.

The Thai Meteorological Department has issued warnings for all southern provinces as the storm is due to hit between the January 3 and 5.

Ang Thong National Marine Park, which includes 42 islands in the Gulf of Thailand, will be closed to everyone during this time period.

The park is just north of Koh Pha Ngan, Koh Tao and Koh Samui off the coast of Surat Thani province.

All ferry services between the mainland and Koh Samui will cease this afternoon.

The storm is forecast to make landfall on the southern coastal provinces of Nakhon Si Thammarat, Surat Thani and Chumpon from Thursday night into Friday and will affect the Andaman coast provinces mainly on Saturday.

Read the rest of the Mirror article HERE.