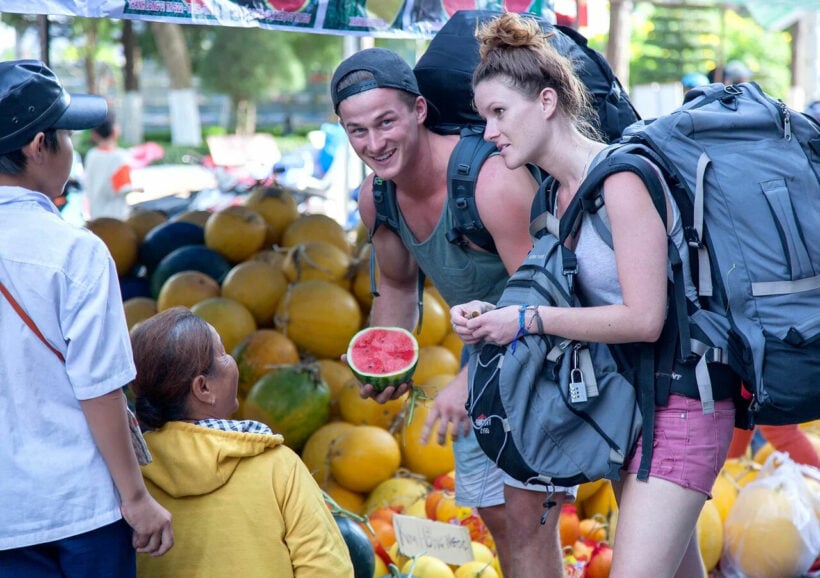 A pair of Western backpackers buy watermelon from a roadside fruit vendor in Vietnam before the pandemic. Credit: MIOTRAN | Pixabay

The Ides of March came and went without so much as a word on Vietnam’s much anticipated border reopening on March 15. But the news comes today, with the Ministry of Health officially announcing that foreign nationals entering Vietnam now only need to provide a negative Covid-19 test certificate to enter the country and will no longer be required to quarantine.

It’s better late than never for international travelers wishing to enter the Southeast Asian nation for the first time since two years of pandemic, during which Vietnam has imposed strict Covid-19 restrictions on tourism and re-entry.

As of today, the only Covid-19 related requirement for visitors will be a negative RT-PCR test taken within 72 hours before departure or an ATK test taken within 24 hours, according to a statement from the health ministry.

Those who cannot take a test before departure now also have the option of testing within 24 hours upon arrival. Once they test negative, they are free to leave their accommodation.

All tourists to Vietnam must also use the official PC-Covid app to monitor their health for the first 10 days of their trip. Children under the age of 2 are exempt from testing.

Vietnam stopped all inbound tourism and issuing tourist visas to foreigners in March 2020. At the time, the tourism industry accounted for some US$32 billion a year of the country’s pre-pandemic economy, the AFP reported. But travel restrictions have since seen tourism grind to halt.

Beginning in November last year, a vaccine passport program saw tourists begin to trickle back in, amounting to little more than 10,000 arrivals to date. A bubble arrangement allowed for fully-vaccinated (and wealthy) tourists to play golf at resorts. Last month, the government announced its intention to resume tourism, saying it would lift most travel restrictions beginning March 15.

In addition to ending quarantine measures for arriving travellers, Vietnam has also announced the resumption of its 15-day, visa-free travel for citizens from 13 countries, including the neighbouring Asian nations of South Korea and Japan, as well as the European countries of Britain, Germany, France, Italy, Spain, Denmark, Sweden, Norway and Finland.

Unsurprisingly, the communist country also reopened its doors to travelers from Russia and its ally Belarus (formerly Belorussia or “White Russia”) — despite President Vladimir Putin’s recent invasion of Ukraine, which has seen the West and their allies rebuke Russia with a slew of sanctions more severe than those imposed on North Korea.

As the Omicron variant sweeps through the country of some 97 million people, health authorities have reported nearly 200,000 new Covid-19 cases a day. But the health ministry insists the situation remains “under control,” with the majority of cases being mild, and steadily low rates of hospitalisation and death.

The ministry cites the near perfect fully-vaccinated rate of 98% among adults as mitigating severe reactions to the current Omicron wave. But it still sees room for improvement, as it plans a new round of booster jabs for adults, as well as vaccinations for teenagers and children.

AdvocatusDiaboli
33 minutes ago, Fluke said: The UK is fully opening up from this Friday , no entry restrictions at all and the Covid pandemic has finished and every thing is back to normal You left out the biggest part…

AdvocatusDiaboli
1 hour ago, Thaiger said: and will no longer be required to quarantine. Unlike Thailand’s Clayton’s quarantine …. The quarantine you have when you don’t call it a quarantine. First night you have to stay in a SHA+ hotel …..…

PapayaBokBok
The girl in the pic...loaded with backpacks and not a drop of sweat--cool as a cucumber

Poolie
1 hour ago, PapayaBokBok said: The girl in the pic...loaded with backpacks and not a drop of sweat--cool as a cucumber Photo taken in Clacton on a February afternoon.......

Cabra
Muh... No vaccine requirements or testing on arrival, but still requiring covid insurance to enter. Given VNs rise in daily infections, your biggest risk at the moment is a clean PCR/ATK test to get out to your home country.