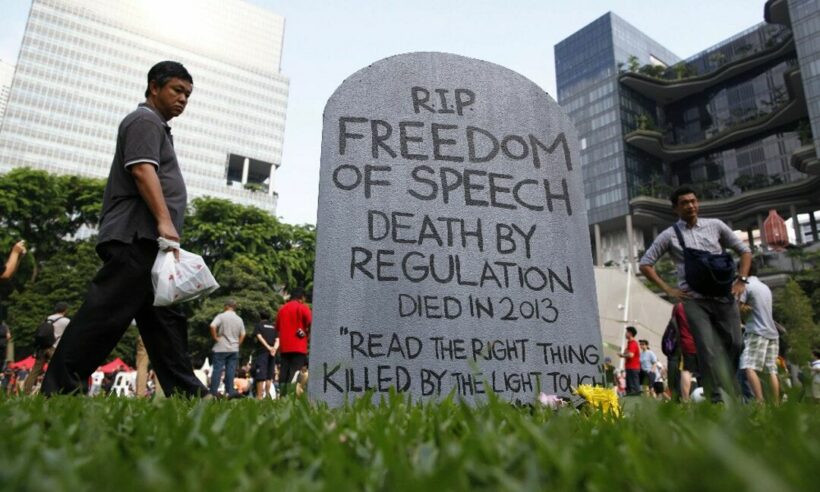 Critics of Singapore’s new foreign interference law are worrying about how the island-nation’s government may weaponise the new Bill to stifle free speech. But the Singaporean government maintains that its new Foreign Interference Countermeasures Act “is needed to prevent outside meddling in the city state’s domestic affairs”.

Singapore’s strict regulatory and licensing environment, sweeping censorship and libel laws, has pushed the country’s rankings in the annual International Freedom of Speech Index, down to 160 out of 180 countries – behind Russia, Brunei and Uzbekistan, and a swathe of other 3rd world countries.

One of the government’s 10 opposition MPs says the FICA will be a “Trojan horse”, allowing the new Bill to be used as a blunt tool against free speech and dissenting views.

The Foreign Interference Countermeasures Act was put to the vote by the ruling People’s Action Party last week. The party holds 83 of 93 of the country’s parliamentary seats. All supported the bill, pushing it through with a huge majority. The government says the new law is necessary to counter potential incidents of “foreign interference”.

The new Bill can classify people, groups or NGOs as “politically significant persons” (or entities), and can include political parties and members of parliament. Anyone who wants to appeal being branded this way will, in the future, have to appeal directly to the Home Affairs Ministry, instead of the country’s courts.

Among the rules any “politically significant” person or entity will have to declare any “arrangements” with “foreign principals” or donations of 10,000 SGD (about 246,000 THB)) or more.

There are also fines of 10,000 SGD or 14 years in jail for people that don’t declare their donations or allegiances. Entities could be fined up to 1 million SGD.

Kumaran Pillai, the publisher of The Independent Singapore website, which has 1.6 million unique visitors every month, says the new Bill has little clarity on the new powers of the Home Minister.

“Whether intentional or not, the government is setting up barriers to entry in the media landscape in Singapore.”

Independent media outlets in Singapore have an embattled history with the country’s notoriously draconian approach to controlling the political narrative, from local and overseas news providers.

Many foreign, and independent, news outlets have been prevented from setting up outlets in the island-state, despite larger international media organisations prepared to throw money at the projects to get started.

“Critics claim the Singaporean Government is trying to “close off the internet, and control or ban alternative or critical voices.

Singapore’s media scene has been dominated by a near-duopoly for decades… Singapore Press Holdings, which publishes the government’s “cheer squad” daily national newspaper, The Straits Times, and Mediacorp, for the island’s television and radio stations.

SPH is chaired by a former minister of the ruling party.

Mediacorp used to be wholly owned by Temasek Holdings, Singpaore’s investment fund. On its Board are members of the Home Affairs Ministry.