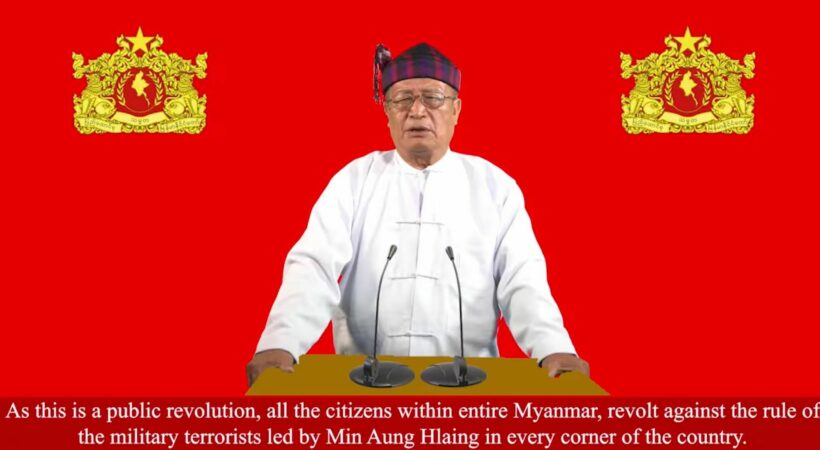 PHOTO: The NUG announces defensive war against the junta in Myanmar. (via Facebook)

In Myanmar, the National Unity Government made up of deposed former leaders announced a defensive war in the name of the Burmese people, but other countries are urging peace to allow humanitarian efforts to continue. The NUG formed a shadow government to represent the people of Myanmar in the wake of the February military junta that took over claiming election fraud in the popular vote.

Outside of Myanmar, foreign governments plead for both sides to refrain from violence. Indonesia has become a leader of international diplomacy regarding Myanmar and has called for both sides to act in the interest of the Burmese people and to maintain peace to allow for humanitarian aid to take place. The UK Ambassador to Myanmar called for all sides to talk while condemning the junta’s brutality on Facebook.

The NUG announced their counterattack in an effort to pull together all the splintered factions of insurgents and pro-democracy protesters that all oppose the military junta, and to try to convince administrative officials and soldiers to defect. They earlier formed the People’s Defence Forces as the armed faction of their movement in alliance with ethnic minorities that have long opposed the military.

But the ruling military says the bluster is just a cry for attention and marched in force yesterday in a show of strength after Tuesday’s showing of both passionate protesters and, separately, ethnic minority insurgents ramping up battles against the army. The military has killed over a thousand protesters since February, and clashes continue nearly daily including recent scuffles with Kachin rebels.

Though it’s unconfirmed that these violent engagements and large protests in Mandalay, Sagaing, and Magway yesterday were a direct response to the NUG call to action, the group’s declaration was well received on Burmese social media, according to the International Crisis Group. Their Myanmar expert says the war declaration may cost the NUG some international support from those who urge peaceful action.

But many Burmese feel that the threat of battle is the only option after ASEAN’s diplomacy has been alarmingly slow, frustrating members like Indonesia, Malaysia, and Singapore, and Western countries have slowly imposed sanctions that haven’t pushed hard enough for resolution. Erywan Yusof, the recently appointed ASEAN envoy to Myanmar, said he had negotiated an as-yet-unconfirmed ceasefire to allow aid to safely be dispersed, and commented that they are watching the NUG’s call to arms closely.

China, on the other hand, has warned against Western countries supporting the NUG uprising, saying fighting will be endless in a sort of proxy war. The Chinese have vast economic ties to Myanmar and have opted for a more hand-free approach to the conflict, saying that they wish for stability but oppose foreign interference.

Poolie
I think you'll find that only about fourteen countries in the world out of one hundred and ninety three recognise Taiwan as such. They include the Vatican. That sort of representation. Its a shame you lost interest, I could have…
Changnam43
41 minutes ago, Poolie said: Name one. Sri Lanka, New Zealand, Cambodia, Taiwan, Pakistan, the pacific islands, Kenya. And more but I don't want to waste more energy on a pro China zealot. How much are they paying you?
Changnam43
Oh. And India.

Poolie
1 hour ago, Changnam43 said: Sri Lanka, New Zealand, Cambodia, Taiwan, Pakistan, the pacific islands, Kenya. And more but I don't want to waste more energy on a pro China zealot. How much are they paying you? What I'm worth.…