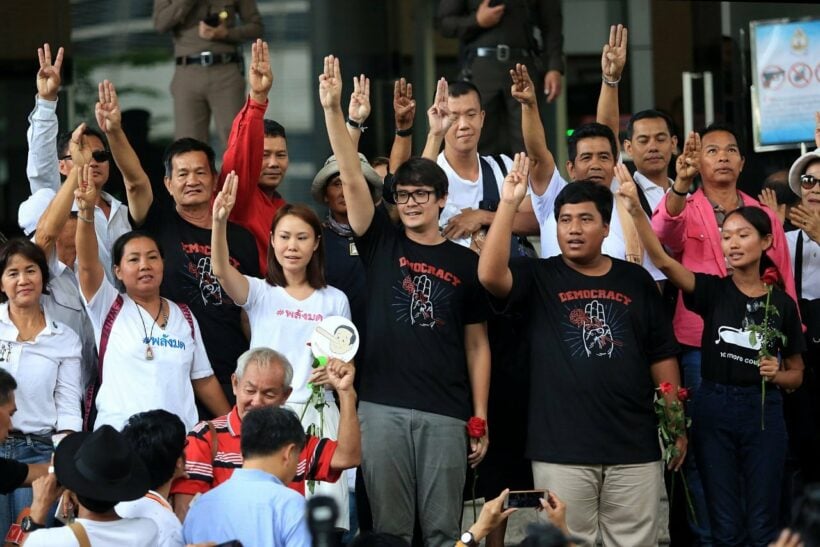 Fifteen political activists have been granted bail shortly after the Criminal Court ordered their 12 day detention following charges resulting from participation in last Tuesday’s pro-election assembly in the capital.

The activists were released yesterday on 100,000 baht bail each with the condition that they must not take part in political gatherings that will “break laws and put society at risk”.

Police had opposed bail, arguing that many of the activists had been charged and released several times for involvement in political assemblies.

“They have become defiant and are not afraid of the country’s laws,” interrogating police officers wrote in the detention request to the court

“Their actions also caused damage to the country’s economy and tourism.”

The activists had been in police custody since Tuesday evening, when they led a 500-strong peaceful march to Government House to demand the junta government hold elections this year. The attempt ended unsuccessfully, as the key activists were blocked from reaching their destination and turned themselves in to the police.

The assembly, held on the fourth anniversary of the junta’s coup, was supposed to be a grand event. The activists have been holding rallies since January demanding an election this year.

The group included noted student-turned full-time activists Rangsiman Rome, Sirawit Serithiwat, Chonthicha Jaengrew, lawyer Anon Nampa, educator Nuttaa Mahattana and activist Ekachai Hongkangwan. The detention of the activists has caught the attention of political observers and rights networks and movements, who either demanded the junta immediately release them, or paid them visits.

At least 14 networks, from university student networks to international organisations, also called for the junta government to stop prosecuting people for merely engaging in political assembly.

“Detaining and charging peaceful protesters makes a mockery of the promise that authorities will lift political restrictions within the next month,” said Katherine Gerson, Amnesty International’s campaigner on Southeast Asia.

“The NCPO must stop misusing the criminal justice system as a tool to suppress dissent and to harass human rights defenders, activists and political opponents,” Gerson added.

At least 68 people were approached by authorities from May 17-22 when the attempt to march to Government House took place, according to Thai Lawyers for Human Rights (TLHR).

“The actual number of harassed people could go up to hundreds as many were unreported,” the TLHR said.

“Some people were tracked by officers all day long. Some were asked to be photographed or called by phone almost every couple of hours to ensure that they would not join the assembly in Bangkok,” they said.