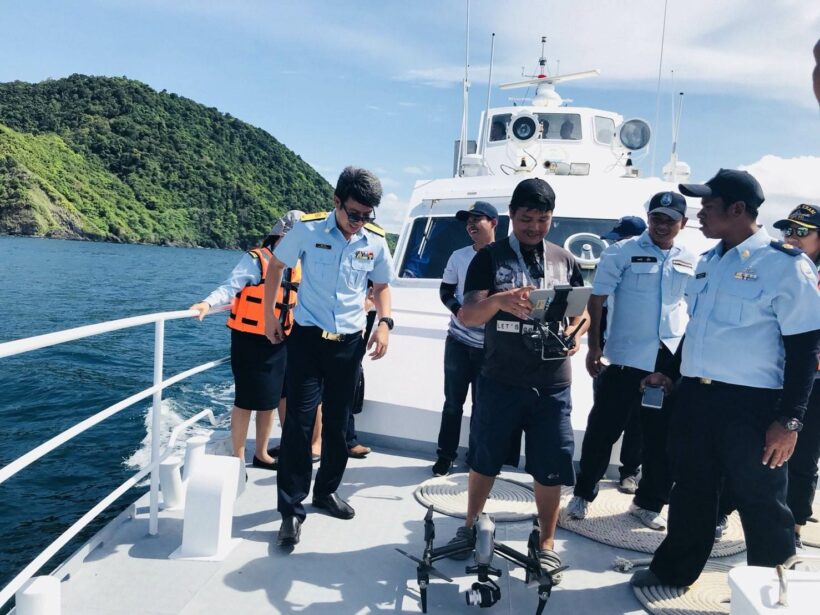 Officials from the Department of Marine and Coastal Resources and the Marine Endangered Species Unit at the Phuket Marine Biological Centre continued looking for for the whale shark which was spotted caught in a fishing net a week ago.

There were strong winds and waves up to one metre high hampering the search. Distance vision was down to less than 500 metres.

The search area covered Koh Khai heading to Hao Lan Cape to Koh Yao Yai and Koh Dokmai in Phang Nga. Then the boats headed back to Koh Maithon. The day’s search ended at Koh Bon after covering 127 square kilometres. Still no sight of a whale shark, dead or alive.

Searches have been conducted most of this week and officials have asked the local Sea Gypsy community, tour boats and dive tour boats to keep their eyes out for any signs of a whsle shark.

“The lady doth protest too much, methinks.” Hamlet, William Shakespeare.

Officials appear to be going to extraordinary lengths to show some interest in finding a whale shark that was clearly dead as a doornail when it slumped back into the Andaman Sea last Friday. The video was quite clear, and if getting caught in the fishing net in the first place and being dragged onto the boat didn’t kill it, the following 10 minutes of handling to get it free surely did. The daily media releases about investigating the fishing vessels and the search reports seem to be trying far too hard to appease social media. I think it’s time to admit the poor fish is well-dead and the fishing boats should be fined, reprimanded and allowed to return to fishing the waters, legally. The story’s now as dead as the whale shark.