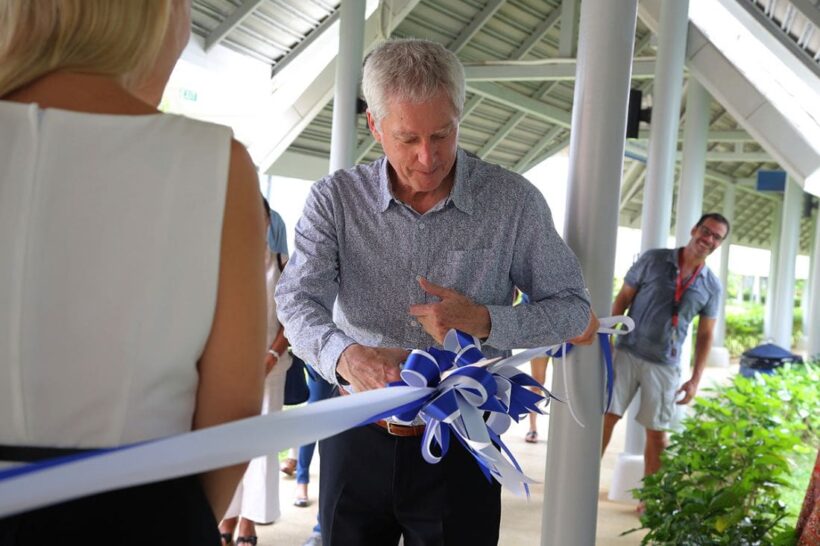 On Sunday, November 18, world-famous Buddhist Scholar Dr. B. Alan Wallace took time out of his two-day seminar to officially open UWC Thailand’s on-campus Mindfulness Centre. His visit attracted more than 300 participants, and underpins UWCT’s perspective that mindfulness is integral to a 21s​t​-century education.

The UWCT Mindfulness Centre is used daily for secular mindfulness practice by classes ranging from Nursery to Grade 12, where students explore how to ‘pay attention to the present moment, on purpose, with kindness and curiosity.

Mindfulness at UWCT also goes beyond the students and is embedded into how the school’s teachers teach. It requires staff to be grounded in present moment awareness with an attitude of non-judgment, kindness, and curiosity.

“Mindfulness is integral to a UWCT education, and has been an on-going focus since the school was founded in 2008. When deciding where to locate the new centre, we chose the entrance of the school so that it would be the first thing guests at UWCT encountered and enquired about,” explained Jason McBride, UWCT’s Head of School.

“It highlights our commitment to integrating mindfulness into campus life with a dedicated space for practicing,” explains UWCT’s Mindfulness Mentor Kru Lucy Keller.

Ordained by the Dalai Lama after spending 14 years training as a Buddhist monk, Wallace (Stanford University) has dedicated the last 40 years to philosophical study, Buddhism, and teaching. His translations, popular publications, talks, and academic essays give testimony to his fervent desire to learn.

Wallace continually seeks innovative ways to integrate Buddhist contemplative practices with Western science to advance the study of the mind.

Dr. B. Alan Wallace is joined by the school’s Head, Jason McBride for the official opening

Man arrested over murder of woman in Mai Khao