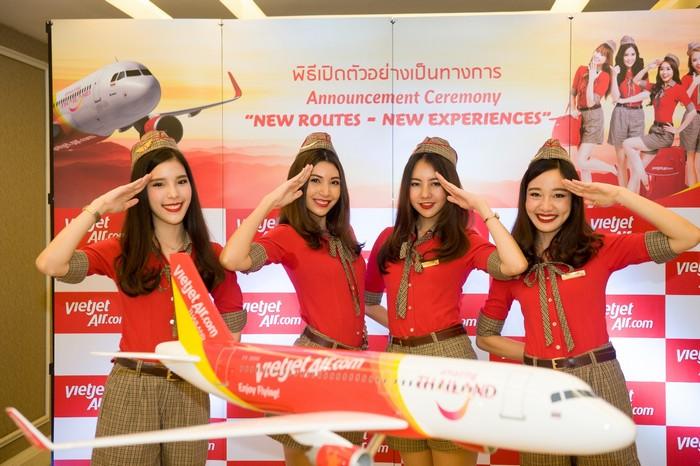 PHUKET: Vietnamese low-cost airline Vietjet announced its ‘domestic debut’ in Thailand on September 6 and the launch of new flight routes from Phuket to Bangkok and Chiang Rai this month.

The ‘new-age’ airline already flies from Bangkok to Ho Chi Minh City and Hanoi and operates 53 routes in Vietnam and to Thailand, Singapore, South Korea, Taiwan, China and Myanmar with A320 and A321 aircraft.

The new daily Phuket-Bangkok route takes off on September 15 as does the Phuket-Chiang Rai route, which flies three days a week. The airline is also launching daily flights on a Bangkok-Chiang Mai route starting September 26.

The budget airline also unveiled a promotion campaign to tie in with the new route launches, offering one million ‘zero-baht’ promotional air tickets for bookings made from September 9 to September 11 for passengers booking flights during specific periods on its website.

Speaking at the launch event, Tourism and Sports Minister, HE Kobkarn Wattanavrangkul, said the new low-cost routes would help foster relations between Thailand and Vietnam, in line with the mission of TAT’s ‘Two Countries, One Destination’ program, which has been running since last year.

Vietjet’s Vice President, Madam Nguyen Thi Thuy Binh, said: “Three years ago, Thailand became Vietjet’s first international destination. Thailand and Vietnam have shared a close relationship thanks to our similarities in culture, cuisine and character. There are now more than 300 Thai expats working in a variety of positions at Vietjet, which is also a driving force for us to further expand our flight network in Thailand today,”