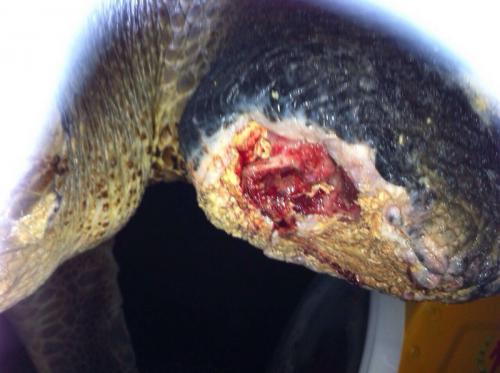 One of the two turtles, a male between 15 and 20 years old, was found on Patong Beach with leg and head injuries inflicted by a boat propeller.

The other turtle, a female between five and 20 years old, was found earlier that day at Nai Harn Beach.

“The turtle found at Nai Harn Beach had several cuts on her fins from a net,” said Kongkiat Kittiwattanawong, head of the Marine Endangered Species Unit at the Phuket Marine Biological Center (PMBC).

Both turtles were transferred to the PMBC to be treated and are being kept under observation.

The creature – rated as a vulnerable species by the International Union for Conservation of nature – was rescued by the staff of Phuket’s Scuba Cat Diving company while they were on a diving trip last Thursday and saw the turtle struggling in the water off Koh Racha Yai.

PMBC veterinarian Patcharaporn Kaewmong said the turtle was suffering from an internal infection and was still in critical condition.

“The turtle is about five to 10 years old. We still cannot determine its sex. On its front flippers it has old scars from fishing nets. Its shell was fractured and the animal was malnourished and in weak condition,” Dr Patcharaporn explained.

“We gave it an injection of antibiotics and vitamins. It is slightly better now, but it is still having difficulty swimming,” she added.