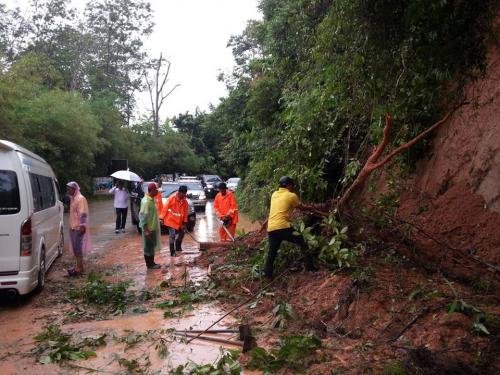 PHUKET: Minor flooding from heavy rains across Phuket over the weekend has now drained, leaving roads clear and island residents to resume their daily business, officials have reported.

The news comes after deluges flooded main roads in Phuket Town – notably Phuket Road, Montri Road and Rassada Road, all in the heart of the Phuket Old Town quarter, where water ran up to 20cm deep yesterday.

Heavy rain over the weekend also caused a landslide on Saturday on Soi Yodsanae, the lone road leading up the hill to the Big Buddha image in Chalong.

“We also posted signs to warn motorists that some roads might flood if the rain continues,” she added.

A hotline has been set up to assist Phuket Town residents in need of help due to flooding.

Minor flooding in Patong over the weekend ground traffic to a halt at the usual flooding sites: on Phang Muang Sai Kor Road, in front of Patong Police Station and at the Sai Nam Yen Intersection near Patong Hospital (map here).

“The roads flooded to depths of about 50cm, but now they are clear for motorists to use again,” he said.

Following the landslide on Soi Yodsanae, Chalong Municipality workers used a chainsaw and other equipment to help clear the road of trees, soil and other debris that blocked the lane.

“Chalong Municipality has teams of officers on 24-hour standby, ready to receive reports of any landslides and floods in our area, and to assist residents,” said Chalong Mayor Samran Jindapol.

The Chalong flood and landslide hotline can be reached by calling 076-282 255.

Meanwhile, the Thai Meteorological Department (TMD) at noon today issued a severe weather warning for all regions along the Andaman coast.

All small boats were advised to stay ashore, as waves reaching up to three meters high were expected on the Andaman Sea until at least October 9.

Heavy thundershowers covering 80 per cent of Phuket are forecast to continue today.

More rain is expected Tuesday and Wednesday, but with the intensity and frequency of the thundershowers slowly diminishing, and affecting 60 per cent of the island by Wednesday afternoon.