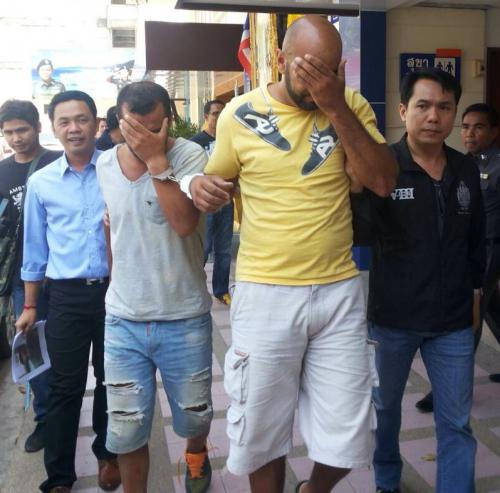 PHUKET: Phuket Police arrested two French nationals for bribing an officer of the law yesterday, while a third man is still on the run.

Karin Radoun, 28, was also charged with ATM fraud and being in the country illegally. He and Karim Akrour, 36, denied all the charges when presented to the press this morning.

Police are still hunting for a third suspect, a Frenchman identified only as “David”.

On Wednesday evening, Mr Radoun and David were captured on CCTV interacting for 11 minutes with a Siam Commercial Bank ATM at the entrance to the Baan Yin Dee Boutique Resort in Patong.

During that time, the machine confiscated three cards from them after they failed to enter the correct pin number multiple times.

Officers patrolling the area had been told to keep an eye out for ATM skimmers, and after noticing that the men had been using the ATM for an unusually long time, decided to investigate.

“As our officers pulled up on a motorcycle, both the suspects fled to a motorbike and drove off,” said Sutthichai Thianpho of the Patong Police.

As soon as the police arrive, Mr Radoun and David flee the scene.

Police radioed ahead, but within minutes Mr Radoun and David had ditched the bike.

Mr Radoun jumped into a pond, where he was found shortly thereafter. Mr David escaped.

Mr Radoun told police that David was a French national who had offered him 10,000 baht for a ride to the ATM machine. He then offered the officers a bribe to let him go, Col Sutthichai said

Patong Police accepted – in preparation for a sting operation.

Patong police arranged for a French national to meet Mr Akrour at the McDonald’s in Jungceylon. Once the money was handed over, officers moved in to arrest Mr Akrour.

Although Mr Akrour told police that he had brought the money not as a bribe, but to post bail for Mr Radoun, he was charged with attempting to bribe an officer of the law.

Officers discovered a number of ATM cards when they searched his bag, but have not yet charged him with a crime in connection with the cards.

“We will continue to investigate him. More charges may be added later,” Col Sutthichai said.