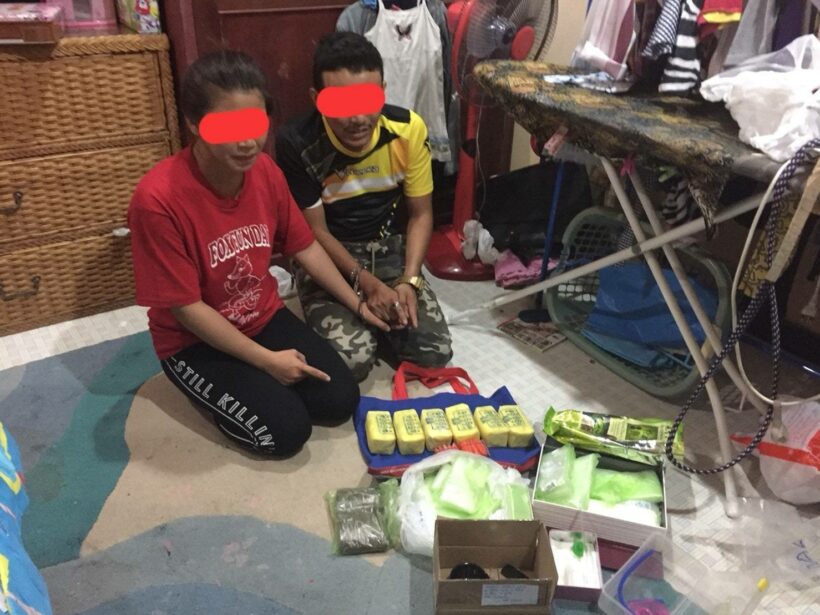 Eight suspects have been arrested with over 14,000 methamphetamine pills and 104 grams of crystal methamphetamine over the past two days. Two of them are senior university students.

28 year old Tanapat Naoprai and Sarocha Horgiean were living at a house in Rawai. Both are senior law students of a university in Phuket. Officers seized 14,000 methamphetamine pills from their house. They were taken to the Chalong Police Station where they have been charged with illegal possession of Category 1 Drugs with intent to sell.

36 year old Wisit Poomnak was arrested at Chalong Temple. Officers seized 8.38 grams of crystal methamphetamine and 18 methamphetamine pills. He was taken to the Chalong Police Station where he was charged with illegal possession of Category 1 Drug with intent to sell.

30 year old Nantawan Sritongkun was arrested in front of a FamilyMart in Chalong. Officers seized 7 methamphetamine pills. She was taken to the Chalong Police Station where she has been charged with illegal possession of Category 1 Drugs.

27 year old Mallika Songmuang was arrested at a house in Wichit. Officers seized 0.47 grams of crystal methamphetamine. She was taken to the Wichit Police Station where she has been charged with illegal possession of Category 1 Drugs.

And 41 year old Rsart Tawan was arrested on Wichit Songkram Road in Phuket Town. Officers seized 100 methamphetamine pills. He was taken to the Phuket City Police Station where he was charged with illegal possession of Category 1 Drugs with intent to sell.

Officers also found a bag containing 100.60 grams of crystal methamphetamine inside a box under a tree in Soi Rat-U-thit in Wichit. 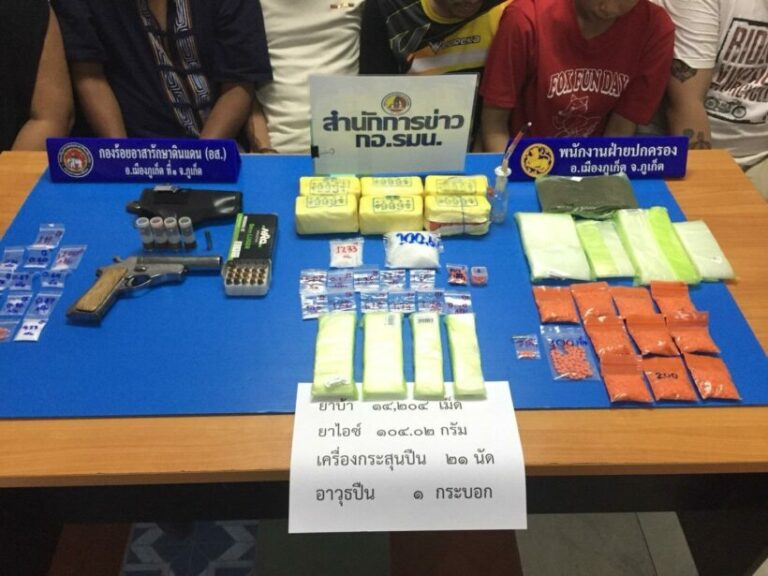 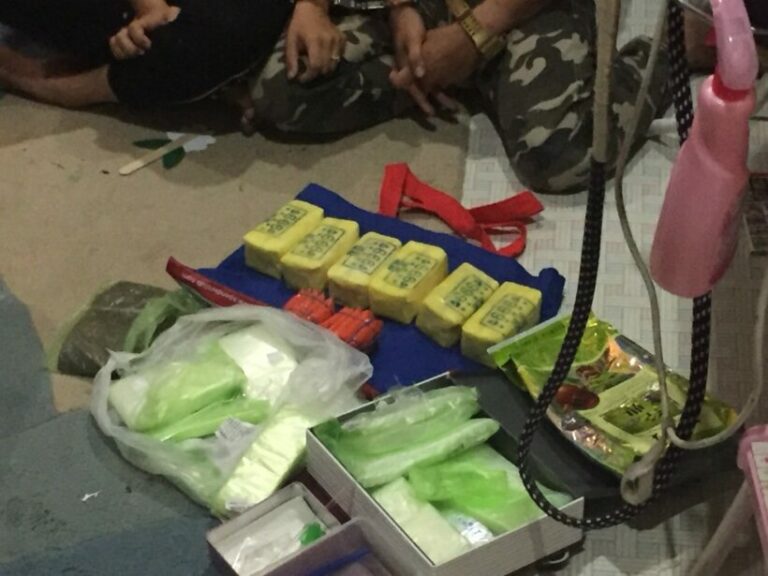 One rescued, one dead, one missing in Phuket surf

The drunk, off-duty police officer in Phuket who has caught on camera shooting and beating a noodle vendor on Bangla Road is now facing attempted murder charges as well as charges of carrying a firearm in public without a necessary reason and firing a weapon in a public area. The commander of the Phuket police station said he ordered investigators to prosecute the officer Pornthep Channarong with every criminal charge that can be applied.

The officer had gotten into an altercation just before dawn yesterday and shot a young vendor who was walking by. Surveillance camera footage show the 25 year old suddenly falling to the ground after being shot. The officer walks up and shoots the vendor at a close range, but it appears the second shot did not hit the vendor. The officer also slapped the vendor in the face, picked him up and shoved him over, and then kicked him as he lay on the ground.

The vendor has a 4 year old daughter and 3 month old son. His wife says normally he works as a motorbike driver, but he was helping his mother selling noodles. He was shot while he was walking back from collecting a noodle bowl, she says. The vendor is in critical condition and being cared for at Vachira Phuket Hospital’s intensive care unit. He’s in need of Type B blood.

“For his condition, the doctor told me that the bullet went through his lung. He lost a lot of blood. We need a lot of Type B blood for him.”

A disciplinary investigation into the incident was launched by police and Pornthep was officially dismissed from the Royal Thai Police force. Region 8 Police Commander Kitrat Panpetch says the incident does not reflect the police force in Phuket.

“The incident was caused by an officer who did something wrong that our organisation does not want. We are a big organisation with more than 200,000 officers under our control. Our officers are not all bad like this.”

Phuket Provincial Police Commander Pornsak Nuannu says he has reminded the police chiefs across the island to discuss reasons for carrying firearms in public.

“Carrying firearms is to prevent any type of crime that may happen, not to commit a crime by themselves like this incident. If I see any police doing such a thing, I will decisively proceed in terms of both officer discipline and criminal charges.”

The following is a press release from Thai Vietjet on its new promotion “Welcome Back to the Sky” and the resumption of Phuket-Chiang Rai flights.

Thai Vietjet today announced the flight resumption of its domestic cross-regional service between Phuket – Chiang Rai, in response to the increasing travel demand after the government began relaxing travel measures in each province. The airline will resume the service for four (04) round-trip flights a week on Monday, Wednesday, Friday and Sunday, with the flight duration around 2 hours and 5 minutes, starting from 26 February 2021 onwards. The flight details are as follows:

In addition, the airline also announced the resumption of other domestic cross-regional services including the flight between Hat Yai – Chiang Rai and Chiang Mai – Nakhon Si Thammarat from 19 March 2021 onwards.

Following the service resumption announcement, the airline launched special promotion “Welcome Back to the Sky”, offering special fares from just THB 99 (not inclusive of taxes, fees, surcharges, and add-ons) for Thai Vietjet’s flights between Phuket – Chiang Rai and the flights to/from Bangkok (Suvarnabhumi). The special fares are available for booking from 24 – 28 February 2021, with travel period between 8 March – 30 June 2021 on SkyFUN.vietjetair.com

As the COVID-19 situation is under control, Thai Vietjet has been adding flight frequency in line with the increasing demand for travel. The airline has also recently introduced its new product on SkyFUN, the ‘TRIP EASY PLUS’ – travel insurance with coverage of COVID-19 starting from THB 180, which provides further convenience and travel confidence to passengers to travel with the highest level of safety during the pandemic. For more information, please visit https://skyfun.vietjetair.com/insurance.

Thai Vietjet is committed to providing on time scheduled flights with the highest safety complied with the standards and regulations of the relevant authorities. Thai Vietjet was named the fastest growing low-cost airline in Thailand 2020 by The Global Business Outlook Award. The airline also owns one of the world’s newest and most modern fleet with an average age of only 2.7 years and was awarded the highest ranking for safety with 7 stars by the world’s only safety and product rating website airlineratings.com. The carrier has been strictly performing aircraft disinfection dailythroughout its fleet in compliance with Thai Ministry of Public Health.

The Centre for Covid-19 Situation Administration says 4 of Thailand’s major tourism destinations are to be prioritised in the distribution of vaccines. They are Phuket, Chon Buri, Chiang Mai and Surat Thani. In addition, a further 9 provinces with significant infection numbers are being prioritised in the rollout of the first vaccine doses arriving in the Kingdom today.

Taweesin Visanuyothin from the CCSA says 70,000 doses will go to the hard-hit “highest control” area of Samut Sakhon, where Thailand’s second outbreak began late last year. 8,000 doses are being set aside for medical officials in the central province, along with 6,000 for frontline healthcare workers, 46,000 doses for seriously ill patients, and 10,000 doses for migrant workers and local residents.

In the case of the vaccines going to tourism spots, it is not yet known which groups will be vaccinated first, with that decision being left to the Provincial Communicable Disease Committee and other related authorities.

Meanwhile, the CCSA says other plans for the 4 tourism destinations are being considered, including the possibility of “area quarantine”, which would allow vaccinated foreign arrivals to remain within certain boundaries during their quarantine period. The Tourism Authority of Thailand has been pushing for a vaccine passport policy for vaccinated visitors, while PM Prayut Chan-o-cha says the government may consider lifting quarantine restrictions for vaccinated tourists.