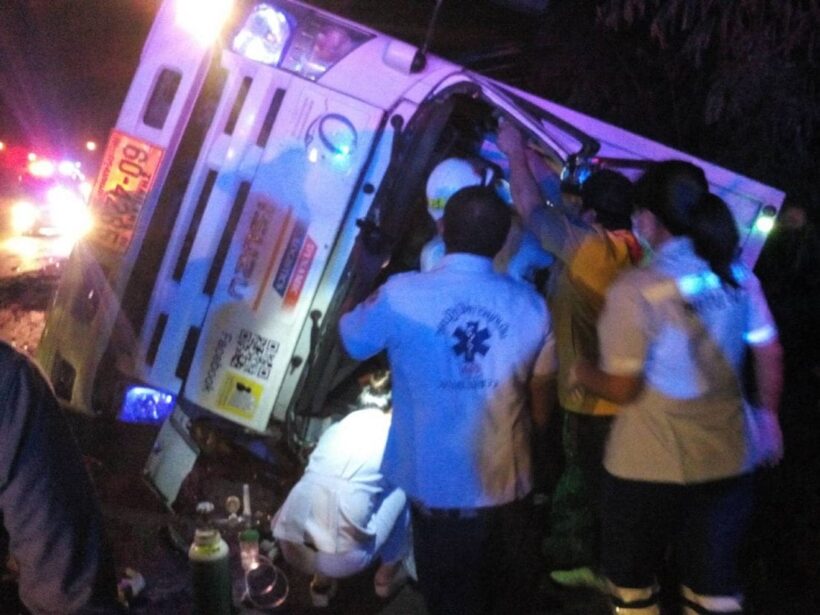 Two people have survived after a six wheeler truck, carrying goods on the way to Patong, has overturned in the far north of the island.

Police and rescue workers arrived at the scene on Thepkrasattri Road, southbound, near the Phuket Gateway at 1am this morning, to find a six wheeler truck overturned on the side of the road.

The truck driver, 27 year old SuJinda Yeamloi from Songkhla, was waiting at the scene. 23 year old Duangjit Kongbangpoe was still stuck inside the cab crying with pain.

Rescue workers took about half an hour to free her with hydraulic cutters. She was immediately taken to the Thalang Hospital.

The truck driver told police that he was driving from Surat Thani to deliver goods at a shop in Patong with his girlfriend.

He was driving in the right lane when a pickup truck was driving behind him, honking his horn indicating he was going to overtake. SuJinda says he moved to the left lane to allow the pickup to pass but lost control of his vehicle and rolled over.

Police are continuing their investigation to find the cause of accident.