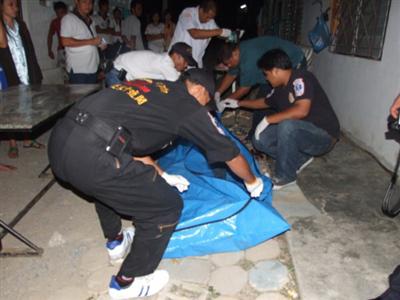 KATHU, PHUKET: Police are searching for suspects wanted in connection with a shooting murder in Kathu early this morning.

Thung Thong Police were notified of the shooting at about 3:30am.

At the scene, in front of a small rental home off Wichit Songkram Road, they found the victim’s body lying face up, riddled with 9mm bullets.

The victim, a large Thai man, was surrounded by a crowd of onlookers when police arrived at the scene.

He was later identified as Pornsak ‘Jame’ Thongbaiyai, a native of Nakhon Sri Thammarat.

Mr Pornsak was hit by five 9mm bullets, including one to the center of his skull.

Police ruled out robbery as a motive for the attack after a 3-bahtweight necklace, two bahtweight bracelet and over 40,000 baht in cash were collected as evidence during a search of the victim’s body.

Also found nearby was the victim’s own fully-loaded 9mm pistol.

Initial investigation revealed that Mr Pornsak worked as a tout on Soi Seadragon and was also heavily involved in gambling.

A witness told police Mr Pornsak was returning home from Patong by motorbike with a fellow tout identified only as ‘Yai’ aboard.

The pair were trailed by two other motorbikes, each with a man and woman aboard.

After Mr Pornsak pulled into the driveway of his small rented home on Soi Kathu Women’s Cooperative, one of the assailants opened fire.

The first shot knocked Mr Pornsak from the bike. The shooter then fired four more bullets to make sure he was dead before both motorbikes sped off in the direction of Kathu Waterfall.

Thung Thong Police blocked off all possible escape routes but the perpetrators remain at large.

Police believe Mr Pornsak must have drawn his own gun, but not in time to return fire.

A nurse who witnessed the aftermath of the shooting said she saw Mr Yai flee on foot into a wooded area nearby.

He is now sought by police for questioning.