Well, Andrea Bocelli appeared at Saphan Hin park in Phuket, probably one of his least memorable singing venues, last night to herald in the new year. After an hour of searching through all the social media this morning I stumbled on the Instagram account of President of the Phuket Tourist Association, Bhummikitti Ruktaengam.

Performing, it appears, with the accompaniment of a white grand piano and a local performer. We look forward to posting more photos of the auspicious entertainment event.

This writer has lost 500 baht to his Good Morning Thailand co-host Jay.

One of the best voices of our generation is going to sing in front of an audience who, mostly and sadly, would have never heard of him. His son, Matteo, is also meant to be performing. They are a class act!

The whole sorry saga of the ‘Andrea Bocelli in Phuket for New Year’ saga started with an announcement by the TAT that, as part of of its efforts to attract tourists back to Phuket, they would invite Lisa from K-Pop band BlackPink and renowned tenor Andrea Bocelli. OK, two different demographics performing at what would have to be two different venues. One audience would know little, if anything about the other singer, and visa versa.

This writer happens to be a fan of both performers and genres.

To throw Andrea Bocelli into this mix seems, well, at odds (to say the least). And it’s free, apparently.

I’d like to tell you all about the night… parking details, entry points, performance times, support performances, etc, etc. Accept that I really don’t know much about the event. Information has been scant, negligible, well hidden (I am trying to be polite).

“Organised under the concept of ‘Amazing New Chapter @Phuket’, the countdown will feature Italian tenor Andrea Bocelli and many top Thai artists,” said Thapanee Kiatphaiboon, TAT’s deputy director for the domestic market. “There will also be the magnificent ‘Pearl of Andaman’ light show featuring more than 20,000 fireworks that will be set off at midnight to welcome the New Year.” 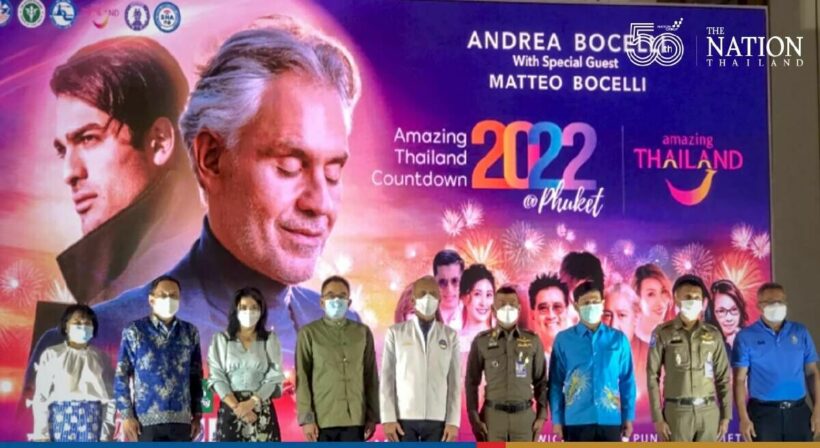 Well, they’re sort of committed aren’t they after getting a huge poster made and posing in front for the obligatory press shot.

Now, to be clear, the likes of Andrea Bocelli don’t usually do a couple of well known ditties to a backing track in a public park. He’s not the type to reel off “Run to you” and “Living on a prayer” as a warm up to an Italian aria.

Usually Bocelli would perform in a stadium, or an arena, or a grand theatre or an opera house, with amazing acoustics and an audience dressed for such an occasion. And there’d usually be a full orchestra, pomp, flair and professional stage and lighting.

I just don’t see any of this transpiring at Saphan Hin Park in Phuket Town, probably better known in the news for drug deals and the occasional crime. Not Italian tenors. Unless he brought his own sound system and audio team he might also be surprised by the standard of Thai concert audio – either too loud, too soft, distorted or ‘mai dai’! Hope at least they find a decent, in-tune, piano for Mr Bocelli.

Maybe in Sanam Luang, in front of a well-lit Grand Palace in Bangkok, with an orchestra, covered stage, pro sound and lighting and comfortable seating and a 6 month lead time. But that’s not the plan…

The matter was further muddied today by announcements about Andrea’s 50 minute performance for new year on Maltese TV (Andrea lives in Italy). As it happens, that performance, which will be aired tonight, was recorded last month.

“This New Year’s Eve is going to be special for many reasons, one of which is the fact that Andrea Bocelli will feature on TVM for a small concert shot right here in Malta.

The world-renowned tenor will perform a 50 minute production along with an ensemble, singing eight songs across two iconic locations across the island – Fort St Elmo and St John’s Co-Cathedral.” Read more HERE.

That a couple of hi-sos in the TAT and the Ministry of Sports and Tourism may have happened to like Andrea Bocelli and K-Pop starlet Lisa (who was born in Thailand), isn’t a good reason to announce a ‘confirmed’ event about 8 weeks out from the performance date. As we later found out neither performers had been approached, or their management, before the two performers were announced as attending new year events in Thailand.

Lisa’s South Korean management quickly sent out a statement that Lisa would not be attending the New Year event. The Andrea Bocelli mystery has never quite been answered. His Phuket dates have never appeared on his comprehensive website, which includes dates for all his performances.

As of 5.45pm on New Year’s eve this writer is none-the-wiser about a time, exact location (Saphan Hin is a large public park), dress code, entry procedures, etc. Except all attendees to new year revelries in Saphan Hin tonight have been told they need to be vaccinated against Covid, AND either have a recent, doctor-approved ATK test with them, or have a nasal swab test on entry (“…welcome to the Andrea Bocelli concert mam, please put your head back and relax”).

If the details have been posted somewhere, they’ve been well hidden.

So we hope that the people that do attend this evening will have a wonderful night with one of the greatest singers of our time. I will be putting on a recent concert with Andrea Bocelli, Matteo Bocelli and Francesca Battistelli performing 9 days ago, “The Heart of Christmas” on my large screen TV. In the comfort of my couch, without getting a swab test.

Just looking out the window, I hope it doesn’t rain as well.

Happy new year Andrea, wherever you are.

LoongFred
On 12/31/2021 at 6:34 PM, Paco said: And where is the news, about many other places where you can not even go drink something with new year and there are no events because of the SELECTED places where they can…

Transam
Just now, HolyCowCm said: So we disagree which is fine. Be seiious as fireworks for that event did not cost anywhere near his fee unless someone trumped up the cost and lots of folk pocketed some. And until the real…

WilliamG
20 hours ago, poohy said: Hardly up to his Sarah Brightman duet days is he (mind you it was a fair while back) I can understand what Lloyd Webber saw in here, more than Bocelli!

AdvocatusDiaboli
59 minutes ago, Transam said: I think the money spent on fireworks out strips the concert. Up in smoke Thats where my money goes In my lungs And sometimes up my nose When troubled times Begin to bother me I…
HolyCowCm
1 hour ago, Transam said: You worry to much about how Thai folks money is spent, I mean, if you were to talk submarines, you would have a valid point....🤭 PS. Not talking about fireworks at the event, I am…