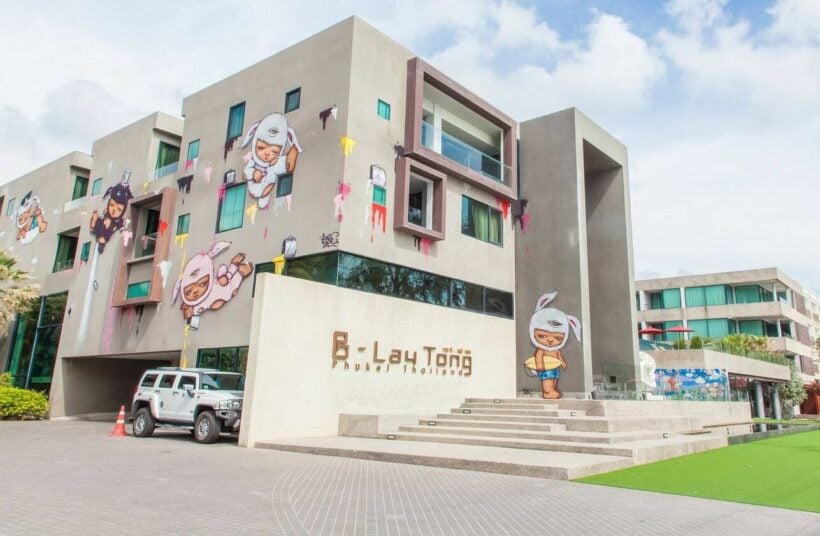 PHOTO: A Thai man was arrested for shooting a foreigner in a Patong resort. (via Facebook B-Lay Tong Phuket)

Though few details are available now, a Thai man was taken into custody by Patong Police early this morning for allegedly shooting a foreign man in a resort. The incident took place around 2 am at a resort along the Patong Beach Road and police arrested the local man just outside the resort around 4am. The victim’s condition is currently unknown. The incident comes just a few days after a Thai man in Kanchanaburi stabbed 2 British men, killing one of them.

The alleged shooter was arrested at the B-Lay Tong Phuket resort, at the northern end of the Patong Beach Road, and the arrest report indicates that the man accused of pulling the trigger lived nearby in Patong and was 54 years old. The suspect was arrested in front of the resort with a 9-millimetre semi-automatic handgun in his possession along with bullets for that gun.

The story behind the shooting that has been released to the public is still a bit vague. The Patong Police were alerted of a shooting at 1:50 am last night and were informed that a trespasser had been shot inside the resort. A foreign man, whose name, age, or country of origin were not identified, was said to have caused chaos after trespassing and entering the resort, suggesting that he was not a guest.

There was no information on whether the Thai man arrested for the shooting was security or an employee of the resort, a guest, or just a person in the area. All that was confirmed is that the foreign man who was said to be creating problems in the resort was confronted and, at some point, two gunshots were fired.

Police did not report the medical condition of the man who was shot, nor did they release any other details about the incident or the man arrested. The charges that the Thai man is facing in the shooting incident hint that the victim was not killed, as the prosecution is for attempting to kill someone, and for carrying a firearm in the city, village, or public way without justifiable reason.

Mynemesis
10 hours ago, Noble_Design said: A lot of details seems to still be lacking in this news. Hope more will come soon to get a better picture No…….. really
Easterneye
Won’t be reported by any of the famous 😂😂😂 thai vloggers living in never never land

Cabra
But did he deserve it? Just teasing... I hope no one died. Stay safe and alert boys and girls. Let this be a reminder for all those you think central and south America is such a great alternative to Asia.…

Transam
18 minutes ago, Poolie said: https://www.thephuketnews.com/foreigner-shot-at-patong-resort-82873.php For the gore-seekers amongst you. Hope that helps. 😃 Reads like another farang upsetting the locals, at least he didn't "lose" his head in this one, but probably learned a lesson.. Just guessing though...😋