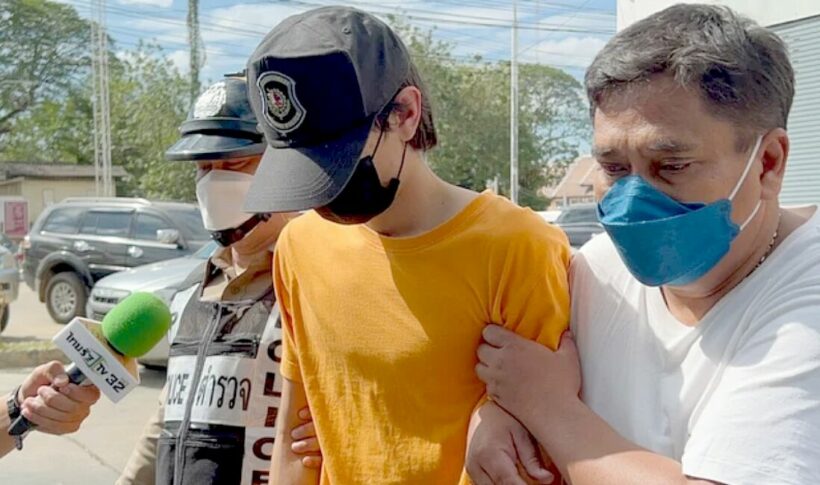 PHOTO: The alleged attacker was arrested in the stabbing of 2 British men in Kanchanaburi (via Piyarat Chongcharoen)

Police in the western province of Kanchanaburi now believe that a man they took into custody is responsible for a brutal knife attack on two British men that resulted in one of their deaths. Yesterday morning at 8:49 am, police found and apprehended a 23-year old Thai man that many suspected was the assailant in the stabbing.

New reporting revealed that Prasut Thipthep was arrested very nearby the crimes he’s alleged to have committed when police found him just across the street from the house that had been rented by the British men who were attacked. He was said to be hiding in a room that belonged to a relative.

It was reported that the attacker has a history of mental health issues, with hospital records for previous problems. After the crime was committed, angry residents, believing he was responsible for the grisly murder, attacked and beat the suspect enough that he had to be sent to the hospital for treatment.

Sufficient evidence was left behind at the scene of the crime including the sickle-shaped knife used in the stabbing and a pair of slippers shoes believed to be owned by the attacker. The man remains in police custody and will be held at the Muang District Police Station for further investigation. He’s been charged with murder and attempted murder for the incident.

According to police, the two British men were playing loud music on a radio in front of their house after 3 am as they sat at a table drinking beers. They were surprised by a Thai man with a long sickle-shaped knife confronting them and attacking them. It is thought that the attack may have been provoked because the Thai man was upset by the loud music late at night

55 year old Shaun Kevin Dagnan (previously reported as Sean Kewin) suffered serious wounds from stabbing and was admitted for emergency treatment in the nearest hospital. New reports say that while his life is no longer in danger, she is still being treated closely at Paholpolpayuhasena Hospital for his wounds.

But 49 year old John Marcus was found face down in a pool of blood near his chair in front of the house with a stabbing to his neck that, despite the hospital’s best efforts, resulted in his death.

Vince
6 minutes ago, Faraday said: I hoped for a sensible answer, Vincent. Please write out 100 times: I will be respectful to Khun Faraday. 📖 @FaradayI have nothing more to say on this topic.

Bluesofa
1 hour ago, Faraday said: I hoped for a sensible answer, Vincent. Please write out 100 times: I will be respectful to Khun Faraday. 📖 Perhaps Vince could try speed writing?

AMc
4 hours ago, Vince said: It became fashionable in one corner of the world to attack state mental health care as "socialism", and to claim to want "patients rights" (their right not to be treated?). The attack against mental health…

Vince
Just now, AMc said: The attack against mental health institutions was championed and orchestrated by people most in need of those same institutions. As they say in Peterborough "you're right" :-)

Bluesofa
36 minutes ago, Vince said: As they say in Peterborough "you're right" :-) I see you're cottoning on to these things. I think in Lowestoft they would say, "You're very right."