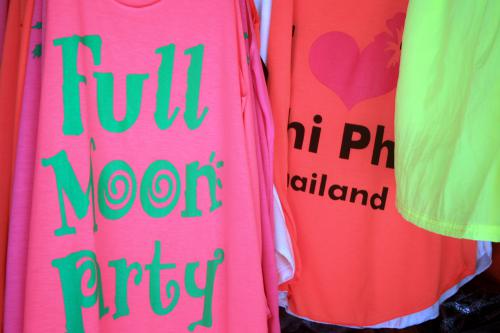 In a country that markets itself to the world as “fun”, the debaucheries of Thailand’s full moon parties have stolen the spotlight as concerns mount over the safety of young partygoers seeking to break loose from reality and walk on a moonbeam.

PHUKET: Australia’s Honorary Consul in Phuket condemned all full moon parties in Thailand last week, citing them as the catalyst for deaths, rapes and robberies of youthful party-goers.

“I will say to you that every full moon party is dangerous, especially the main one in Koh Pha Ngan. There are some bad people looking to take advantage of the tourist relaxing,” Australia’s Honorary Consul in Phuket Larry Cunningham told the press.

“Phi Phi doesn’t have a big party when there is a full moon. Most of the tourists who stay here will go to the party on Koh Pha Ngan, and come back here the day after the party,” the head of the Phi Phi Police Station, Danai Niyomdecha, told the Phuket Gazette.

Mr Cunningham’s allegations against all full moon parties were made in an attempt to balance the alluring images presented in the Australian press, which recently ran a story by a journalist extolling Thailand’s “must experience” once-a-month nightlife.

“An Australian journalist has written in a newspaper that everyone should go to the full moon parties, because they are fantastic. He did not mention any of the dangers,” Mr Cunningham said. “All I did was give balance, saying that it is not all good at these parties.”

“Nobody wants to stop young people from having fun. Thailand markets itself as a place of fun, but people need to be very careful,” Mr Cunningham said.

One major concern cited by Mr Cunningham was the prevalence of illegal drugs at full moon parties. Most notably, cocktails made from leaves of the mild narcotic kratom and some chemicals similar to DEET.

“We have Australian undercover agents go to these parties to see what they are like. We have information that at some of them, people poison the drinks and mix something like DEET and kratom into the mixer,” he said.

Frequent raids of bars in Phi Phi do uncover stashes of kratom, ya bah (methamphetamine), ya ice (crystal methamphetamine) and marijuana, said Lt Col Danai. However, many of the party drugs associated with full moon parties in places such as Koh Pha Ngan are not found on Phi Phi, he said.

“Most drugs we find are sold by hotel staffers, because of our strict penalties against bars found selling drugs,” Col Danai said.

If police discover that drugs are being sold from a bar, the entire bar will be closed down, he said.

“Bars here offer drink promotions, and encourage dancing on the beach, but it’s not anything like Koh Pha Ngan, where the whole beach celebrates together,” said Dr Duangporn. “And since the parties are not so well-known here, the number of accidents that send people to the hospital are low.”

“On September 20, the day after the Phi Phi full moon party, we had nobody connected with the revelry brought to the hospital,” he said.

Steps are being taken to ensure the safety of full moon partygoers, said Superintendent of the Koh Pha Ngan Police, Prachoom Rueangtong.

“We have 100 CCTV cameras keeping an eye on the party areas. There are more cameras across the island,” explained Col Prachoom. “Right now, we are also finding ways to get more CCTV coverage across the beach.”

Most cases that the police deal with concern missing property.

“The majority of injuries during the party are minor, and caused by falls, and we do not keep track of them,” said Koh Pha Ngan Public Health Office Prasit Ritthidet.

“Mobile offices in the party area that staff police, rescue workers, health and medical officers and also some volunteers who can speak English are making a big difference to tourist safety,” Mr Prasit said.

When speaking about the full moon parties on Koh Phan Ngan, Mr Prasit touched on the subject of drug use.

“I’ve never heard about DEET being mixed into drinks, but I do know that spurious whiskey and psilocybe mushrooms have been found in the past. However, police and our officers have become more strict about cracking down on these things,” he said.

The Surat Thani Excise Office inspects every bar before the night of a full moon party to ensure that potentially harmful low-grade alcohol is not being mixed into other bottles, said Mr Prasit.

“This alcohol can harm your eyes, brain and liver,” he said.

Psilocybe mushrooms, which are powerful hallucinogenics, are a popular drug choice at the full moon parties, and offer a high rate of return on investment.

“The cost of the mushrooms is about 8,000 baht per kilogram, but by mixing them into 500-baht drinks, one kilogram could earn a person nearly a million baht. At the moment you can’t find them on the island because of police raids,” he said.

Three police teams have been established on the island to prevent tourists from smuggling illegal drugs into the party. These teams run checkpoints at the pier and mainland bridge; station undercover police on the paths to the party and officers at the entrance of the party, said Col Prachoom.

“We are constantly fighting to keep drugs off our island, especially mushrooms and marijuana. We conduct raids regularly, but the problem keeps returning every full moon,” Col Prachoom said.

• Never go alone. Always attend parties with a group of at least half a dozen friends.

• Don’t bring valuables, including your passport.

• Only order drinks that are opened in front of you. Stay away from mixed drinks, which can easily be drugged.

• Have one or two friends stay sober and “babysit”.

• Go back to your room after drinking.

• Don’t invite strangers back to you room.

• Don’t go to people who call you from their car.

Phuket on alert for floods and landslides

Special Report: Is my neighbor a contract killer?