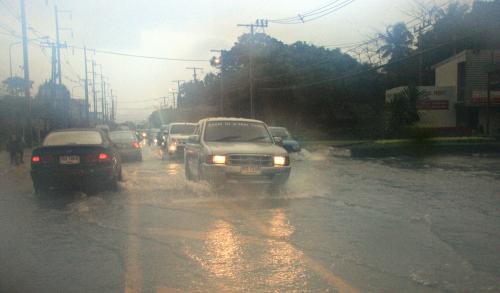 PHUKET: The Disaster Prevention and Mitigation Department (DPMD) yesterday put Phuket on a list of 13 provinces told to be on the alert for possible rain-caused natural disasters. People living along rivers or at the base of hills should be particularly alert, the warning said.

“I have assigned the Administrative Organizations and Municipalities to warn people in their areas to be aware that floods and landslides may occur if the heavy rain continues,” Phuket’s DPMD Chief San Jantharawong told the Phuket Gazette.

“The soil on hillsides will be soaking up water and the slopes may give way under the weight, causing landslides,” he said. “People living near hills should be on alert.”

However, Mr San felt there was some good news for the island.

“Fortunately, the rain in Phuket hasn’t been falling continuously. It rains for 30 minutes or so, and then stops, then rains again after two hours. This is giving the water a chance to drain, and reduces the likelihood of flash floods,” he said.

Heavy rain is expected to continue in Phuket and the Andaman region until at least next Wednesday, according to a weather warning issued by the Thai Meteorological Department (TMD) last Thursday. The forecast includes strong wind and waves due to the southwest monsoon prevailing over the Andaman Sea.

“Waves are around two meters high. Ships at sea have been warned to proceed with caution, and small boats to stay ashore,” said an official at the Meteorological Department’s Southern Meteorological Center at Phuket Airport.