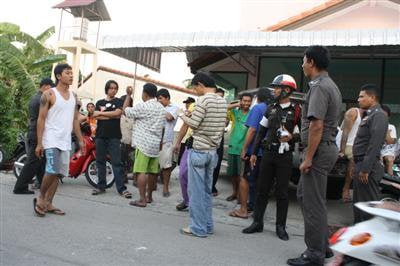 CHALONG, PHUKET: Chalong Police are searching for the man responsible for a stabbing attack that left a young man in critical condition yesterday.

Police were notified of the attack at about 5:30pm.

By the time they arrived at the scene, an unnamed curry shop and dry goods store on Soi Thanuthep in Chalong Village 8, the victim had already been rushed to Vachira Phuket Hospital for emergency treatment.

He was later identified as 22-year-old Songkran ‘Kae’ Saednam, a resident of nearby Soi Yodsane.

Like many Thais, both male and female, Mr Songkran was named after the three-day holiday currently being celebrated throughout Thailand.

If he survives, it will be a birthday Mr Songkran will never forget.

He sustained three stab wounds to the side of his ribcage and was last reported in critical condition.

The name of another man who sustained less serious injuries in the melee was not released, but he is reportedly in stable condition.

According to preliminary investigation, Mr Songkran arrived at the shop by car and confronted a group of men celebrating the New Year in traditional fashion – by drinking alcohol.

Mr Songkran had previously been engaged in a brawl with some members of the group, police said.

Police say they know the identity of the stabber, reportedly a security guard at a well-known residential estate in Chalong.

Police said they have a ‘good chance’ of bringing him to justice.

Phuket tuk-tuk driver to be charged with theft from tourist