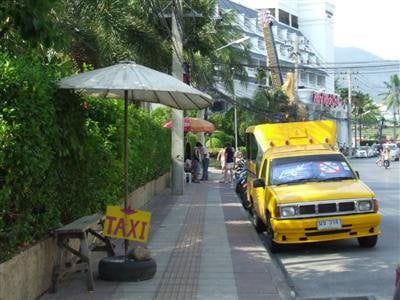 PATONG, PHUKET: Kathu Police will charge a Patong tuk-tuk driver with theft after a Maltese tourist claimed the man purposely drove off with a bag containing his cash and valuables.

At around 2pm that day, he and five friends hired a tuk-tuk from the taxi stand opposite the Mercure Hotel on Rat-U-Thit 200 Pi Road to take them to Karon Beach, he told police.

After arriving in Karon, the men paid the 300-baht fare and the tuk-tuk sped off – with Mr Bonavia’s bag still in the passenger compartment.

They yelled for the driver stop, but he ignored them, they claimed.

The men hired another tuk-tuk to try to track down the vehicle, but the search proved fruitless.

Other drivers at the taxi stand were unable to help, so the tourists went to Kathu Police to file a complaint.

The bag contained 13,000 to 15,000 baht in cash, a mobile phone and a camera, as well as a pair of protective goggles used for treatment of an eye infection contracted in the Philippines, Mr Bonavia told police.

Mr Bonavia and friends arrived in Phuket on April 9 to celebrate the Songkran holiday and planned to return home on May 4, he said.

Police radioed news of the missing bag to patrol units.

At about 4:30pm, the driver of the tuk-tuk, 34-year-old Thongchai Mardkong, arrived at Kathu Police Station to profess his innocence.

He had no way of knowing Mr Bonavia’s bag was still in the vehicle when he drove off and he had no idea as to its current whereabouts, he said.

He had just returned from taking a couple to Robinsons Department Store in Phuket Town so it was possible they had taken the bag from the vehicle, he suggested.

However he remained silent when asked why he drove away despite calls by the tourists for him to stop.

Kathu Police officers including Capt Pratuang Pholmana seemed unconvinced by Mr Thongchai’s version of events and said they plan to forward the case to the court system.

“A judge can decide if he is as innocent as he claims to be,” said the duty officer at the station.