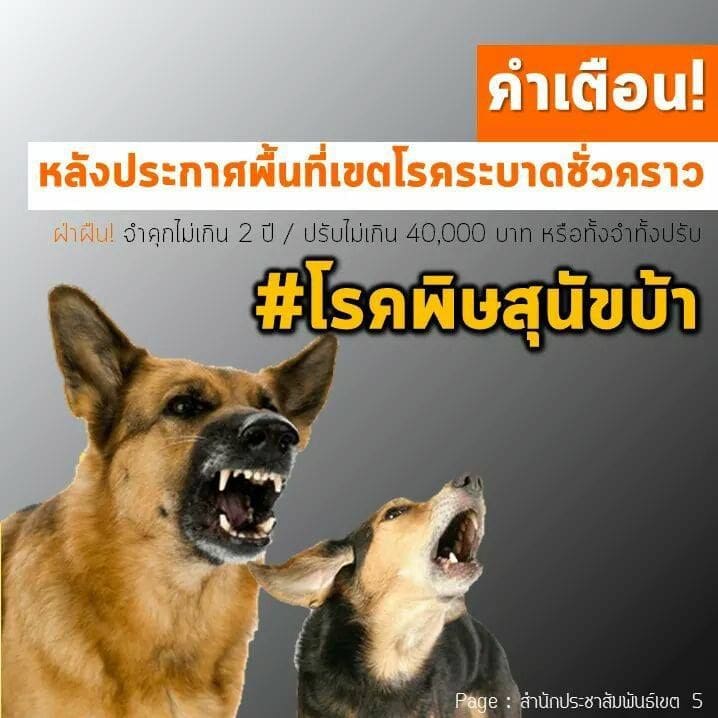 Following the announcement form the Phuket Livestock Development Office that a rabies outbreak zone was set in Chalong area yesterday (January 17), Soi Dog Foundation Co-Founder, John Dalley, explained about the incident as the dog, which was indeed infected with rabies, was sent to Soi Dog Foundation for treatment after it was found very sick. It is the first dog which was found positive for rabies after several years in the one and only ‘Rabies Free’ zone of Thailand – Phuket.

A district livestock development office in Phuket province has announced a Rabies outbreak zone in the Chalong area yesterday.

“A dog was brought into Soi Dog by our dog catchers after it was reported to be vomiting and unable to stand,” said John Dalley.

“It received treatment for several days but did not respond, and symptoms of staggering and being unable to open its mouth, and head tilted to one side led our veterinary staff to suspect rabies as these are classic symptoms.”

“The dog was euthanised and its body sent to the Government testing laboratory. The result indicated that the dog was positive to rabies, the first positive case seen in a dog on Phuket for many years.”

Right after the rabies was detected, Soi Dog Foundation has worked closely with the local Livestock Development Office in order to control the situation.

“Soi Dog are working closely with the Department of Livestock to vaccinate all dogs within a 5 kilometres radius of where the dog was picked up. Soi Dog will focus on strays and the DLD on owned dogs.”

He urged that people shouldn’t be panicked about the situation but be always aware about the importance of vaccination if they get bitten (or scratched or licked on an open wound).

“There is no cause for alarm. We see numerous positive cases in dogs in Bangkok, but no human cases have occurred there in the past 12 months. The traditional picture of a rabid dog foaming at the mouth and attacking people is not a true picture, as with this dog. Anybody being bitten by a dog at any time should always immediately wash the wound with soap and water and go along to their local clinic or hospital to receive the necessary injections.”

John also mentioned about the message that Soi Dog Foundation has been trying to tell government, entrepreneurs as well as people in general that importing unvaccinated puppies to the safe zone like Phuket can be the cause that brings rabies back in the area.

“Although this is likely an isolated incident it should be noted that Soi Dog has repeatedly, over the years, warned of the dangers and requested successive governors to stop the hundreds of very young puppies being imported to Phuket each year for sale at markets and pet stores, but nothing has ever been done. We hope the new Governor will take action. These puppies are generally coming from uncontrolled puppy farms in rabies endemic areas.”

“Puppies cannot be vaccinated against rabies until they are at least 12 weeks old and are reliant on the mother’s immunity providing she has some. The case of a puppy seller in Chatuchak market dying from a bite from a puppy shows the danger.”

“In addition, removing vaccinated sterilised dogs from the street increases the chances of rabies spreading. The World Health Organistion, The Food and Agriculture Division of the United Nations, The World Organisation for Animal Health and The Global Alliance for Rabies Control have issued joint statements advising that the way to eliminate rabies in humans is to eliminate it in dogs first as much cheaper and more effective to do that.

If 70% or more of dogs in a country are vaccinated and strict controls on entry imposed, then you will eliminate rabies.

If you remove vaccinated dogs and put them in a pound, then you are reducing the number of dogs on the street that are vaccinated which allows for others to take their place that may not be vaccinated.”

If a member of the public sees a dog that is staggering or unable to stand then they can call the Soi Dog Helpline on 076 681 029.

What to do if a pet tests positive for Rabies