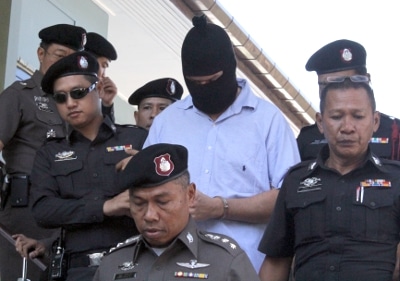 “We are in contact with police there, but at this stage we are not sure when the suspect will be brought to Phuket,” Maj Gen Choti told the Phuket Gazette.

Gen Choti explained that during the yesterday’s re-enactment of the sequence of events that led to the death of Mr Reisz, prime suspect Moshe David under police escort went to the Central Festival Phuket shopping mall before going to the house in Wichit, the scene of the crime.

Gen Choti also told the Gazette that no Thai suspects were being sought by police in relation to the case, despite Provincial Police Region 8 Commander Gen Yongyuth Charoenwanit announcing on Wednesday that officers were now searching for a Thai man.

Mr David is being held at the detention cells at the Phuket Immigration Office in Phuket Town while the police investigation continues, Gen Choti added.

Lt Col Somkid Boonrat, Deputy Commander of Phuket Provincial Police, explained, “The law prohibits prisoners being held at police stations for long periods of time, so we asked the court for permission to hold Mr David at Phuket Immigration so we can question him freely while we continue our investigation.”