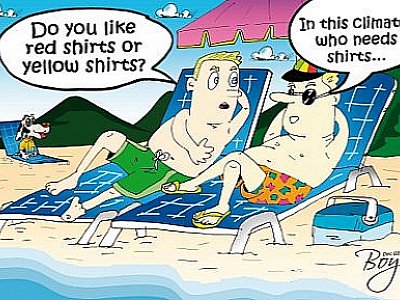 PHUKET: Island residents and expats alike breathed a collective sigh of relief late last month when a dreaded showdown between the Pitak Siam (“Defenders of Siam”), the latest incarnation of the anti-Thaksin People’s Alliance for Democracy (PAD), and government security forces fizzled out on the streets of Bangkok due to lack of popular support and other factors.

As events unfolded in the capital, local hoteliers and other players in our island’s all-important tourism industry cringed at the prospect of yet another crippling episode of “politically”-fueled violence coming at the worst possible time for Phuket: just as accommodation establishments entered the start of the annual “high season” for tourism and most hotels were finally reaching occupancies at or near capacity.

During the Phuket Gazette‘s daily coverage of the drama, some posters in our popular Phuket Forum implied that our coverage was partial; that we had somehow demonstrated support for the protesters by reporting an account of the events by Apharat Chartchutikumjorn, a well-established PAD organizer in Phuket.

As this is quite a serious charge, the Phuket Gazette would like to state for the record that we have no affiliations with, or sympathies for, shirt groups of any color. The red and the yellow must share the responsibility for having brought this country to near-ruin, and both are certainly capable of starting down that path again.

The Gazette has long held this stance – not because we think that the media should refrain from commenting on affairs political, but rather because we oppose any behavior, of any color, that places at risk the success of Thailand’s arduous struggle to establish itself as a genuine Democracy.

We find incomprehensible the enthusiasm with which folks branding themselves as “champions of democracy” jettison the core principals of it as soon as they suspect that their own vested interests are under threat.

Violent street protests, coupled with an endless series of military coups and shredded constitutions, will never get Thailand where its people want and need to go. Creating a level playing field for one and all, with respect for the rule of law, is the only hope.

We acknowledge and support the right to peaceful protest as part of the democratic process, but the reality on the ground is that national-level protests in Thailand are always heavily imbued with the threat of violence – and those who organize the events invariably know this.

We hope our readers will view the Gazette as what we are: staunchly anti-shirt, anti-thug and anti-corruption – and pro rule of law.

Letter from the Phuket Governor: Safety first, with urban growth a close second